It is still cold outside the ANC

Critics of the African National Congress often express incomprehension at the fealty it continues to command.

“When will the scales drop from the eyes of these true believers? When will ANC voters vote with their minds and not their hearts?” goes the refrain. But they are making the mistake of conflating two distinct groups: those who habitually vote for the ANC and the resolute believers.

ANC voters have indeed, in election after election, deserted the party. This is shown by the party’s stagnant turnout numbers. However, the problem for the ANC’s rivals is that instead of choosing alternative political homes, these disenchanted voters have, on the whole, remained sullen abstainers.

Like the supporters for any strongly ideologically based movement — mostly these are leftist parties but the apartheid-driven belief system of the National Party shows that the phenomenon straddles the political spectrum — it's the ANC zealots who can’t easily walk away. Their self-identities are so tied to the cause that they embraced fervently for so long, often at a great personal sacrifice, that to sever ties is simply inconceivable.

There are other costs, too. The ANC High Church does not lightly accept anything less than the unswerving faith of its members.  ___STEADY_PAYWALL___

Although apostasy is not punished by death — as was the case in early Christianity and still is in some Islamic societies — it nevertheless comes at a high cost. Those who won’t obey unquestioningly, who doubt party edicts, or who think that the SA Constitution outranks that of the party, get short and nasty shrift.

That the costs can be incredibly high are made clear in two recent books by ANC stalwarts. Both Themba Maseko, former head of the Government Communication and Information System (GCIS), and Ivan Pillay, a former executive of the SA Revenue Service (SARS), tell harrowing tales of the personal and professional costs that excommunication from the ANC entails. 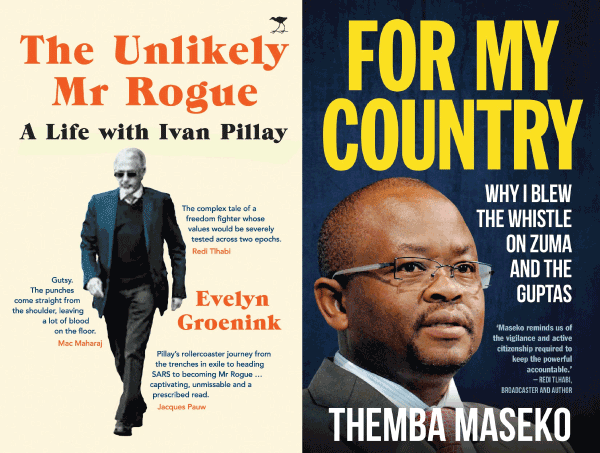 In the recently released For My Country, Maseko traces a lifelong commitment to the party until he made the mistake of refusing to facilitate the state looting of Zuma and his Gupta clan cronies. The Unlikely Mr Rogue, published late last year, recounts, through the eyes of Pillay’s wife, Dutch activist and journalist Evelyn Groenink, his dedication to the ANC from boyhood to returning from exile to help set up the world-class compliance systems that made SARS a bulwark against the rape of state coffers during the Zuma years.

Whether or not one supports the ANC, the trajectories of these two men are compelling. Stripped of ideology and doctrine, it’s about an aeons old dilemma: what do good people do when the powerful movements that they venerate and are dependent on for their daily bread, demand that they do bad things? And since it’s an age-old conundrum, we all know, as these two discover, that it rarely ends well for those who resist.

Maseko joined the struggle at 13 and operated as an underground activist during his school and university years. He was immersed in the catechism of the ANC, as formulated by the SA Communist Party’s high priests, and embraced it unquestioningly. Come liberation, he told himself, he would work wherever and however he was deployed by “our glorious movement … in service of our nation”.

In 2006, Maseko was made CEO of GCIS, but already by 2009, when Zuma became president, he was somewhat disillusioned by the party turning a blind eye to the arms deal corruption. The following year, he was despatched by Zuma —with a giggle and a metaphorically arched eyebrow — to the Gupta’s Saxonwold compound. When he refused Gupta instructions that the government’s entire advertising budget of R600m should be diverted to the family’s media company, he was removed from his position and hounded out of the public service.

Maseko writes that he now regrets his naïveté in believing that the ANC would act when he told party officials of the Gupta corruption. “I trusted the [party] political process and when it failed, I accepted my fate,” he writes. Five years later, inspired by Deputy Finance Minister Mcebisi Jonas blowing the whistle on Gupta shenanigans, Maseko too came clean publicly.

Maseko had struggled to make ends meet after being forced out of GCIS and when he went public, things got worse. The corporate world wouldn’t employ him for fear of incurring ANC wrath, while as a “politically exposed person” he struggled to access the financing he needed to set up on his own. “I became a professional, political and social leper,” he writes, “shunned by friends and enemies alike.”

Pillay’s experience is similar to that of Maseko but even more engrossing. While Maseko was a foot soldier in the ANC, Pillay was a general. As is the nature of high rank, he was always more exposed to the moral ambiguities, the contradictions and the compromises that the struggle demanded.

It was Pillay’s inconveniently efficient, scrupulously even-handed approach at SARS to criminality that saw him targeted in one of the most shameful episodes in South African journalism. Acting at the behest of the Zuma cabal, the Sunday Times smeared Pillay and his incorruptible colleagues as a “rogue unit” that ran an entrapment brothel, dirty tricks against honest officials and businesspeople, and hinted at them masterminding assassinations.

No matter how fantastical and unsubstantiated the claims — the Sunday Times was eventually forced to issue grovelling apologies and had its “investigative” journalism awards cancelled —  it served perfectly the agenda of the state looters. Pillay and his allies were forced out of SARS and in the subsequent five years, some 2,000 disillusioned senior SARS officials also threw in the towel.

As with Maseko after him, the ANC closed the inner sanctum’s doors on Pillay, who apparently now makes a living as a consultant. Despite Pillay and his colleagues being exonerated, President Cyril Ramaphosa’s “new dawn” doesn’t extend to rectifying the iniquities of the past.

Maseko says in an interview with News24 that although he is no longer a card-carrying party member, he will always have a love for the ANC, “because it liberated the country”.

Pillay, too, is still a votary. Groenink writes that although the values once embodied in the ANC’s lodestar elders are gone, “perhaps the North Star can dusted off. It may be a bit grimy but it has not disappeared. So many comrades still carry it within, carry on simply because it is there.”

It is clear from the dented but still intact faith of the likes of Pillay and Maseko — just a couple of the many who have suffered grievously from the corrupt machinations of the ANC — that leaving the spiritual home of a lifetime is not easy. One of the reasons for our political logjam is this inability of many, who despite being disillusioned in and damaged by the ANC, are unable to abandon the faith of their formative years.

What South Africa now needs is the political equivalent of the Reformation that upended Christianity. It needs a Luther-like figure who, instead of fawning over the presidential signet ring, will nail an alternative vision to the Luthuli House door. Schism is the only answer.

Themba Maseko’s For My Country: Why I Blew the Whistle on Zuma and the Guptas is published by Jonathan Ball

Evelyn Groenink’s The Unlikely Mr Rogue: A Life with Ivan Pillay, is published by Jacana

The key drivers behind the JSE delisting trend – Marius Strydom

Shiba Inu, Dogecoin and other cryptos to avoid

The Daily Insider: Even worse than a greedy capitalist is an ignorant bureaucrat