Cape Town – Famed cartoonist Zapiro has defended the use of rape as a theme in his latest cartoon about state capture, saying he never thought he would have to revisit the theme.

Zapiro published his latest cartoon for The Daily Maverick on Tuesday, entitled: "She's all Yours, Boss!"

It depicts President Jacob Zuma zipping up his trousers as one of the Gupta brothers gets ready to "rape" South Africa, depicted as a woman, with State Security Minister David Mahlobo, Social Development Minister Bathabile Dlamini and The New Age editor Moegsien Williams holding her down.

Zapiro on Tuesday said he definitely did not take the depiction lightly, given the fallout over his first drawing of Zuma preparing to rape "Lady Justice" in 2008.

However, he said the current climate in the country over state capture and the Cabinet reshuffle warranted its drawing.

"Everything I was trying to say about Jacob Zuma, and the way that he operates, the way he became president by riding roughshod over the justice system, has come true," he told News24.

"I think the original cartoon over which he sued me for four years but had to drop, holds absolutely true, and I feel now that it's reached a point where so many other people are saying similar things.

"I felt it was now time to take it one step further, and show that it’s not the justice system that has been affected, but the whole country, and he has invited other people to get involved in state capture."

When asked how he felt about its sensitivity towards rape victims, Zapiro said the drawing itself was a metaphor that applies to all South Africans. 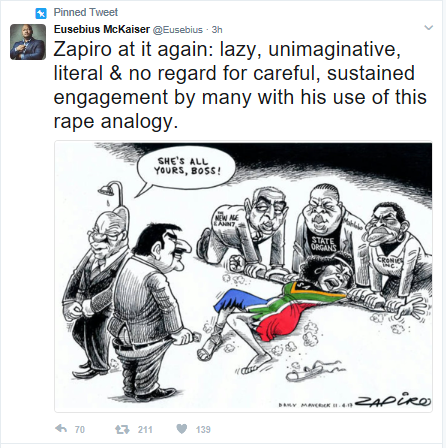 "I really didn't think I'd actually have to revisit the theme at all. It's not as if I want to draw this sort of thing," he said.

"It isn't actually graphic, in the sense that it does everything by suggestion, and nothing by being lewd or overly graphic.

"I would also challenge people to look at the cartoon and see who they empathise with.

"There's nothing in the drawing that enjoys or revels in the idea of rape or gang rape."

He said he's been down this road before, and that cartoons should become part of debates or spark debate, but very rarely influence political happenings.

He would prefer as a cartoonist if he did not have to take such drastic measures in getting a point across.

"As a citizen, I'd prefer having less material, and not have to do something that is going to cause this much furore, because I know it will.

"But as somebody who has a voice, and has the license by convention to do hard-hitting cartoons, I will take that license when I need it, and I felt this one was absolutely necessary under the circumstances."

State Security Agency spokesperson Brian Dube declined to comment on Monday, saying the cartoon was not worth commenting on.

Presidency spokesperson Dr Bongani Ngqulunga had not yet seen the cartoon, and said he will need to look at it first before offering a response.