Lost within the ANC's rot

Jeremy Gordin reviews Chippy Olver's "How to Steal a City: The Battle for NMB: An Inside Account"

How to Steal a City: The Battle for Nelson Mandela Bay: An Inside Account by Crispian Olver (Jonathan Ball Publishers, October 2017)

To start with, a brief “declaration of interests” or caveat emptor. I don’t know Chippy Olver very well, but I do indeed know him. He was one of my wife’s closest childhood friends, and they remain close. But I haven’t seen or spoken to Chippy for, I guess, four years or more. Additionally, I have been living temporarily in France since mid-September, so I know nothing about how this book was “presented” at its launch (launches?) by Olver or how it was received by the media or the chattering classes.

I mention my ignorance about the book’s “presentation” and reception, because until I reached the end I didn’t know what the book was essentially about – or rather what exactly it is supposed to be. Which reminds me: if you want to “get” this book, you need to read it all, from the start to end.

Was this book, I wondered, as suggested by its title, (1) a story of corruption and state capture, one lifting the lid on ANC malfeasance, naming names, pointing fingers, one that would end therefore … in what? … (2) Chippy, who is, or was, a card-carrying ANC member and inter alia a former director-general of Environmental Affairs and Tourism (1999-2005), renouncing his ANC membership and declaring that the National Democratic Revolution (NDR) was a mistake?

Or, having read further, I wondered whether the book was (3) essentially a cry from the heart, about what had happened to him in Nelson Mandela Bay – a kind of journal of anguish, discovery, and hopefully revivification. Or, having read even further, I wondered (4) whether the book was a kind of mea culpa, an explanation and apology, for “his role” in the ANC losing the 2016 municipal elections in Nelson Mandela Bay. 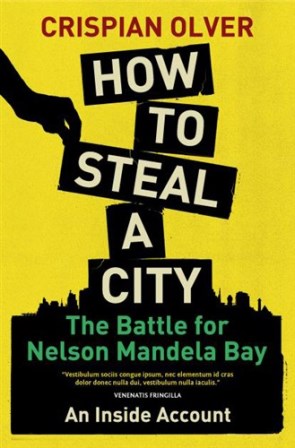 Or, having read a whole lot further, it suddenly struck me: was the book perhaps (5) an exercise in post-facto covering his own tuchis?  “It wasn’t me who done it; it was some other boys; let me explain.” (The last musing, (5), was not likely to please Chippy, or my wife for that matter. What can a fellow say? Amicus Plato, sed magis amica veritas; “Plato is my friend, but truth is a better friend” – or so Aristotle is understood to have said. But Aristotle didn’t have to face my wife.)

The answer to my musings – my answer at any rate – is that this book is all the above, except Chippy does not in the end reject the NDR – he still has hope – and let me say also, regarding (5), Olver did have something about which he had every reason to want to make the record clear.

But it was leaked and run in City Press (e-book 3919; ‘Why we lost the Bay’, Nosipiwo Manona, City Press, 13 August 2016. Available at city-press.news24.com). This got Olver into a great deal of serious trouble – possibly life-threatening trouble – and this is not an exaggeration.

This book is remarkably honest, candid and intelligent. Olver has to deal with his personal “journey” at the same time as telling the story of frighteningly rampant corruption in Nelson Mandela Bay and the ANC: he uses his own experiences to show us that issues are not always one-dimensional, nor are people, and nor even are the corrupt. This is him on the writing of the “assessment” referred to above:

“In the days following the election, I felt run-down and depressed. Back in Johannesburg, I spent hours sitting at my desk, but I could hardly put one thought together, and I found writing almost impossible. My brain was in a fog. In my heart, I felt sick about what I had become – just another ANC apparatchik willing to do anything required to keep the party in power. How had I drifted so far so quickly? But I was also deeply frustrated with the ANC’s lack of proper introspection. There were some home truths that we were not admitting to ourselves. To soothe my exasperation, I penned a short analysis, outlining the reasons why we had lost the elections (3901-3906).”

And do not, dear reader, be too quick to respond, “Well, I also know why the ANC lost the elections – what’s Olver’s problem? It’s as plain as the nose on his face.” Because Olver also knew why – he had discovered the hard way – especially for a proud ANC member – and this was what he had to deal with.

I wrote above that this is a book that you must read all the way through. This is not always so easy. The book is divided into two: the first half deals with the cleaning up of the city – and I am not referring to the streets or sewerage – and the second with the elections in 2016. Having finished reading the book, I wondered why I’d found the first half heavy-going.

The reason is that it is. It is not “sexy” – it is detail about many shady people and trying to clean up an administration – a mandate given to Olver by Pravin Gordhan, then Minister of Cooperative Governance. But the reader does not know these people – at least I didn’t – and sometimes it gets a bit, well, heavy-going. But it must be there because it is the prelude to Olver becoming the ANC’s electoral campaign manager, with Danny Jordaan as its spearhead as mayor-to-be. Which is when the story really picks up.

Oddly enough, Jordaan comes off well, even sympathetically (yes, this was before the rape allegations by Jennifer Ferguson but not before the Fifa imbroglio - or rather the allegations about South Africa's and Jordaan's involvement with bribery to Fifa take place just as the ANC put Jordaan in place as mayor.) But again, dear reader, don’t shake your head dismissively: I don’t want to spoil the story for you, but one of the book’s climaxes, as it were, is what happens in the end between Olver and Jordaan.

There are some humorous or, at any rate, bizarre moments:

“In May 2016, I attended a meeting on local government at Luthuli House. … Gwede Mantashe came bumbling into the room, singing ‘Happy birthday to me! happy birthday to me!’ I greeted him and wished him happy birthday, but the chair informed me that this was in fact not Gwede’s birthday and jokingly remonstrated with the Secretary General for disrupting her meeting. After greeting the first person at the table, Gwede wagged his finger at me and announced to the room: ‘Chippy, bad news, bad news.’ Then he moved on to greet the next person. ‘Bad news, Chippy, bad news,’ he repeated with another wag of his finger. He proceeded in the same fashion around the room. Gwede’s bizarre finger-wagging left me dumbfounded. Bad news about what? Or was I the bad news? Was he really saying that he didn’t support what we were doing in Nelson Mandela Bay? I had no idea (3172-3180).”

Towards the end, Olver writes:

“Looking back, the story of Nelson Mandela Bay is a textbook lesson in state capture and the symptoms of what has become a national disease. What happened in the metro mirrors in many ways what has unfolded across South Africa. What started out as political interference in the appointments of officials and micromanagement of the City Council morphed into something entirely more sinister once criminal elements grafted themselves onto the relationship between the ANC and the municipality (4070-4074).”

But then he also writes:

“Our country has shown the world that it is capable of extraordinary change. South Africans from all political leanings are mobilising to reclaim their institutions. They are picking up the baton, and a groundswell is brewing. And that fills me with hope (4292-4294).”

Maybe. But I found this book sad. Having read it, I suddenly had a vision of a little Martian wandering about on earth – completely alien in every sense. And I thought that in a way he was Olver: the morality which Chippy took into the ANC – the values that propelled him into joining the ANC – to create a government of the people, by the people, for the people – seem these days to be completely foreign to South African soil. Read the book: relative to most of the people with whom Olver deals, it’s as though he comes from another planet.

Bell Pottinger did a bad job, you say?