A picture of a 19-month-old toddler sitting alone at a table at her Centurion playschool went viral yesterday on social media, provoking an outcry over “racism” and an immediate intervention from Gauteng MEC Panyaza Lesufi. The incident was triggered after the Afrikaans-language Koeitjies & Kalfies crèche, which describes itself as an independent Christian day-care facility, sent pictures to parents of the day’s activities.

One of the pictures showed the child of Mosinyi Wanatsha, a Botswana national, sitting apart from other of her classmates at a crèche class party. Wanatsha circulated the image on both her housing estate’s and her personal, but public, Facebook page. See below [faces obscured by PW]. It was then more widely distributed by a relative, Kefhiloe M Mokoka. In the picture distributed by Wanatsha and Mokoka the faces of the small children are clearly visible. 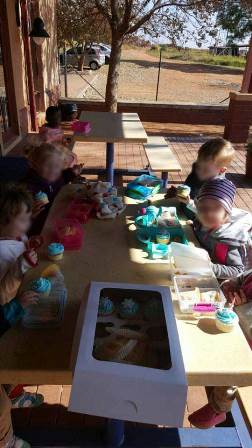 In a post on her Facebook page, published along with the image, Wanatsha stated that when she moved to South Africa “Never once did i anticipate to experience hate crime# racism on this level.” She added:

“Whilst every country has its challenges no amount of preparation or experience in ones life can prepare you for an awful experience such as what is depicted in this picture. my beautiful 19 month year old is made to sit on a table by herself whilst the rest of her class sits cosy on the table next to her, indulging on delectable spread and my poor child sits with just her lunch tin. They say a picture says a thousand words. for me this picture spoke damaging horrible words that in my 34 years of existence never experienced in the 3 continents ive resided in.

I was livid and outraged when the school sent this to me. Whilst my office is 20mins away i sped to collect my child at an instance and remove her from the school immediately. I have never been so livid, outraged , disappointed in all my life. i cant help but think what kind of people can subject such hate to a mere 19month year old child. As a mother i feel i have failed my child considerably by failing to see this from the onset. im so upset im lost for words.”

Wanatsha also published an image of the response, on her estate’s Facebook page, from the crèche (though this was not subsequently widely circulated). The owner Anell Engelbrecht said the facts of the incident were as follows:

2. A table can only seat six children.

3. The teacher asked all the kids to come out the patio for the party

4. N [full name redacted by PW] walked to the playground instead with another little girl.

5. After placing the children, the teacher asked the assistant to bring the two girls.

6. She then placed both at the table next to them.

7. As she was about to take the photo, the other little girl started crying and the teacher asked the assistant to pick her up.

8. The photo was taken at that moment.

9. If you zoom into the photo you will see that N is holding a cupcake in her hand with no icing because her teacher removed it for her. She doesn’t like icing.

10. With these photos were also other photos where N is taking part in class activities and where her teacher is helping her.

11. The photo in question unfortunately does not tell the true story.”

On Thursday morning the image went viral on social media, provoking a frenzy of outrage from many of South Africa’s most outspoken race activists. It was repeatedly retweeted and commented on by, amongst others, Mayihlome Tshwete, spokesperson for the Ministry of Home Affairs. Tshwete stated: “If I ever saw someone treating my child like this.......Jesu, I would be Django Unchained.” Tshwete also published links identifying the crèche and its address and suggested it should be descended upon.

When this image was brought to the attention of MEC Lesufi on Thursday morning he immediately sprang into action. He announced that he would be going to the crèche at 1pm and invited any one of his 26 906 Twitter followers to join him, if they were so minded. He also retweeted the unredacted images of the children a number of times. 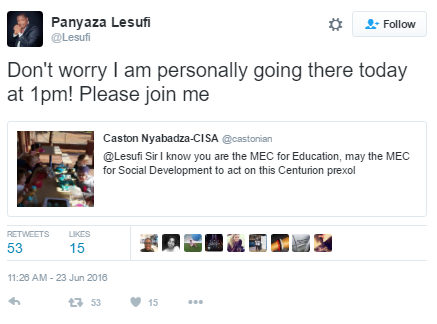 On request he also then posted a link identifying the crèche and its address. 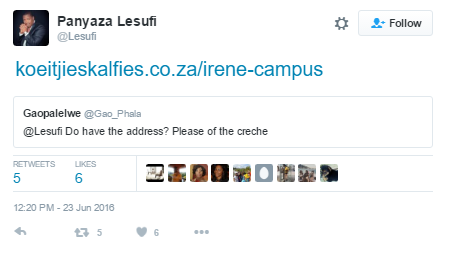 He suggested that he would be playing games with the “racists” at the crèche. 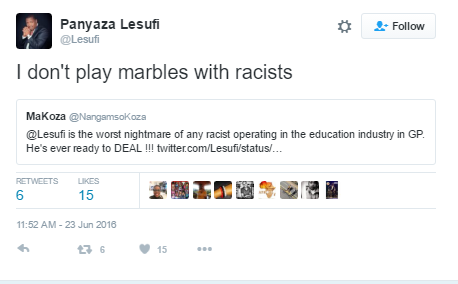 He then tweeted a picture of the crèche on his arrival. 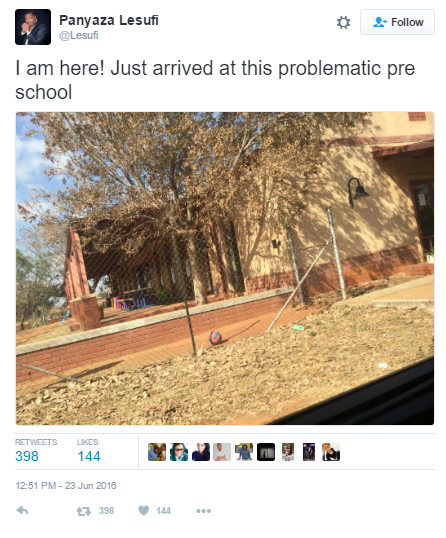 And of himself in front of the crèche in jeans. 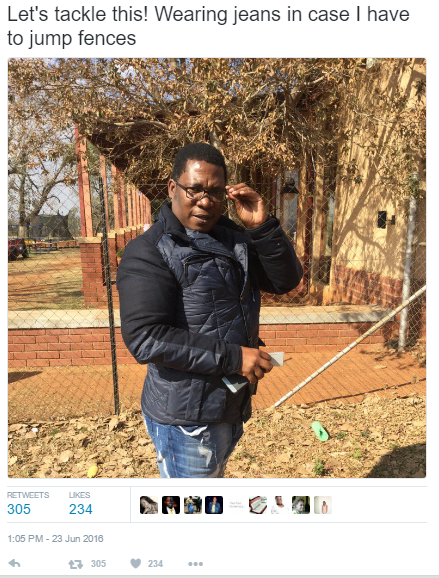 While he was meeting with crèche management Tshwete posted a gif of the whipping scene from Django Unchained with the comment “some exclusive images of MEC Lesufi engaging with the management of the racist crèche”. 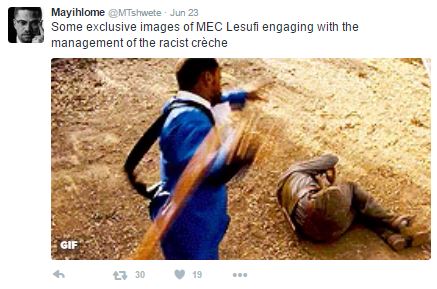 Following his meeting Lesufi expressed disgust at the racial composition of the crèche staff. There were only white children with white teachers, he said. 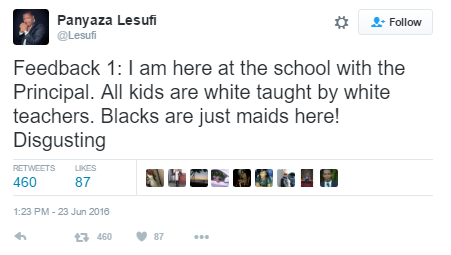 He also announced that he would be sending in a social worker. 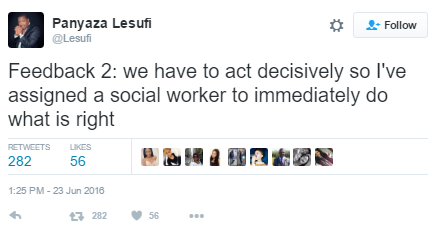 He did not explain however what the school's version of the incident was.

On Friday morning Lesufi declared: “I hate racism with a passion but addicted to non racialism.”

The story on the “racist crèche” received wide play in the South African media. In these stories, online, the faces of the children are blurred of pixelated. The reason for this is that the South African Press Code states:

“The Bill of Rights (Section 28.2) in the South African Constitution states: ‘A child's best interests are of paramount importance in every matter concerning the child.’ The press, applying the spirit of this section, shall therefore: 8.1. exercise exceptional care and consideration when reporting about children. If there is any chance that coverage might cause harm of any kind to a child, he or she shall not be interviewed, photographed or identified without the consent of a legal guardian or of a similarly responsible adult and the child (taking into consideration the evolving capacity of the child), and a public interest is evident.”

It is also a matter of common sense and common decency that you do not publish or republish images of children without the consent or the parents; and more especially when, by doing so, you are throwing them into the midst of a racial firestorm. Wanatsha and Mokoka may not know better, but government employees and public representatives certainly should. While they may not be bound by the Press Code, they are by the provisions of the Constitution.

In this context questions should be asked about the propriety of MEC Lesufi’s conduct. In a context where the crèche had become the target of virulent racial hatred - as evidenced by Tshwete’s fantasies of seeing the staff there whipped - he did the following:

He retweeted images of the children concerned.

He called on completely random strangers to join him on his visit to the crèche.

He published its identity and address.

He published pictures of the crèche on his arrival.

He expressed disgust that the main care-givers and children were all white.

In an often violent and racially divided society this was (to say the least) highly reckless behaviour, which could hardly be regarded as placing the best interests of the children paramount.

It is also worth noting that Lesufi failed to try to establish the actual facts of the incident before publicly intervening - and suggesting racism – even though there was already an alternative (and innocent) explanation in the public domain as to what had happened. He also did not call for calm, or caution against leaping to conclusions.

This would be the usual path followed by someone addicted to non-racialism, rather than race-baiting.

Let's look before we leap

Finally, a solution to the land question?