Water scarcity in SA: A result of physical or economic factors?

South Africa is considered a water-scarce country.[2];[3];[4] This is based principally on physical descriptors like climatic conditions and escalating water demands. This brief investigates whether observed water scarcity in South Africa can be attributed to physical or economic factors, or both.

According to the FAO (2007), areas more susceptible to severe physical water scarcity are those located where high population densities converge with low availability of freshwater. Typical examples in South Africa are the Gauteng and Western Cape provinces. Estimates suggest that Gauteng will receive a net immigration of 1.02 million people between 2016 and 2021.[8] According to Stats SA (2018), the Province remains the leading centre for both international (cross-border) migrants and domestic migrants (from rural areas of Limpopo, KwaZulu-Natal, and Eastern Cape).

The Western Cape is the second major immigration attraction centre in South Africa (Ibid). For example, between 1995 and 2018, Cape Town’s population grew by 79% — a growth not matched by sufficient increase in dam storage capacity (up by only about +15 percent over the same period). Population growth resulted in increased water demand at the residential level.[9]

Localised population growth coupled with profligate water use exert pressure on available resources, resulting in gross imbalances between water demand and supply. For instance, it is estimated that South Africans consume about 237 litres of water per person per day. This is well above the world average of 173 litres per day.[10]

Climate-driven water scarcity occurs when insufﬁcient precipitation and high evaporation create low available stream run-off. This leads to limited water availability. Climate-driven water scarcity is exacerbated by global climate change, climate variability and recurrent droughts. South Africa, as has been noted is recognised as a water-scarce country. The country’s mean annual precipitation is 450 mm. This is well below the world average of 860 mm per year[11]. In terms of a commonly used definition, namely that of the average “Total Actual Renewable Water Resources” (TARWR) per person per year, South Africa is already ranked the 29th driest country out of 193. [12] According to the Department of Communication and Information System, South Africa is the 30th driest country in the world. [13]

In addition, South African precipitation concentration has been observed to exhibit variability in space and time (spatio-temporal variability). Spatial variability: South Africa experiences precipitation that varies significantly between its western and eastern regions. Annual precipitation in the north-western region often remains below 200 mm, whereas much of the eastern Highveld receives between 500 mm and 900 mm (occasionally exceeding 2000 mm) per annum (Botai et al., 2016).

Temporal variability. According to Schulze (2007), the average amount of precipitation need not necessarily be a constraint for successful water resources operations. In fact, one can get by with, and adapt one’s practices and operating rules to, a low precipitation if one has the assurance that the rains will fall when needed or as expected.[14] While the amount of precipitation received may be an issue of concern, the temporal precipitation variability seems to be a critical dimension in South Africa’s water scarcity. In addition, droughts are recurrent and climate is unpredictable. On an annual timescale, South African precipitation concentration has been observed to be highly irregular in most parts of the country.

Pollution-driven water scarcity: water quality can degrade to the point that it is unusable. In this case the water may be available but remain unsuitable for beneficial uses resulting in water scarcity. Water scarcity is thus not merely a volumetric (quantity) issue but equally a quality issue. Consequently, the Rand Water[15] recognised that in South Africa the scarcity of freshwater is exacerbated by major increase in pollutant fluxes into river systems arising from river catchments. These are caused by urbanisation, deforestation, destruction of wetlands, industry, mining, agriculture, energy use, and accidental water pollution. These factors lead to the major reduction of available water resources.

Economic water scarcity or social water scarcity (second-order water scarcity) is caused by a lack of investment in water or a lack of human capacity to satisfy the demand for water, even in places where water is abundant. It is induced by political power, policies, and/or socioeconomic relations. Symptoms include inadequate infrastructure development.

In 2006, the United Nations Development Programme (UNDP) human development report concluded that water scarcity is not solely rooted in the physical availability of water, but in unbalanced power relations, poverty, and inequality.[16] As a result, the FAO[17] emphatically posits water scarcity as an issue of poverty, where unclean water and lack of sanitation have been observed to be the destiny of poor people world-wide.

The observed water scarcity in South Africa is not exclusively attributable to physical drivers. It also has economic causes. Economic water scarcity is caused by a lack of investment in infrastructure or technology to draw water from rivers, aquifers or other water sources. In addition, insufficient human capacity to satisfy the demand for water may exacerbate scarcity (Schulte, 2014).

South Africa’s history of apartheid geospatial planning has resulted in many rural areas not having access to basic water supply and sanitation services (Masindi & Duncker, 2016).[18] In eradicating the historical geospatial inequalities and socio-economic disparities numerous programs have been initiated since 1994.

Despite these programs, overt inequalities in water infrastructure delivery still exist between rural and urban areas. Predominately rural provinces and small towns are characterised by relatively high water-infrastructure backlog and low water service reliability. For instance, Stats South Africa (2016), observed that the municipalities with the largest percentage backlog are generally located in the largely rural areas along the Eastern seaboard in Eastern Cape and KwaZulu-Natal, and to a lesser extent in Limpopo (See infrastructure backlog map in the appendix). The highest backlogs are observed in Ngquza Hill (81,7%), Port St Johns (81,3%) and Mbizana (77,8%). By contrast, municipalities such as Cape Town (0,2%), Drakenstein and Saldanha Bay (both 0,5%), and Witzenberg, and Sol Plaatjie (both 0,7%) barely registered any backlog.

In 2019, the investment disparities have not changed as predominantly rural provinces still lag behind.

This subjects rural households disproportionately to economic water scarcity. Similarly, the Parliamentary Monitoring Group,[19] points out there are gross inequalities in relation to access to safe water and sanitation. Individuals at a disadvantage are largely those in the rural areas, meaning, in demographic terms, poor, African residents of Eastern Cape, KwaZulu-Natal and Limpopo.

It is apparent that observed water scarcity in South Africa is to a large extent attributable to physical causes. These are exacerbated by the impact of global climate change, climate variability and increasing demand on available water resources.

However, the root causes are not exclusively limited to physical conditions. The observed water scarcity in some parts of the country can be explained by uneven investment in water infrastructure, where geospatial disparities are obvious. Rural communities, small towns and rural provinces remain inadequately serviced. This subjects rural communities to the effects of both observed national physical water scarcity and localised economic water scarcity. 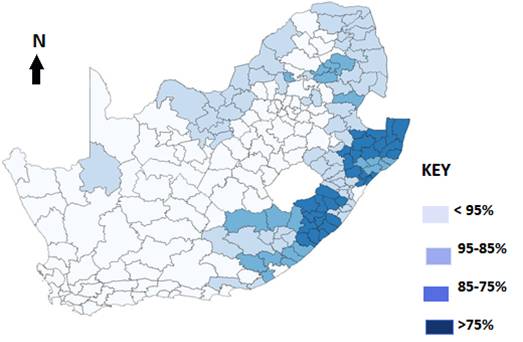 Our submission to Parliament on NHI – HSF

Trump might deserve a Nobel but he won’t get one

How I came to understand the ANC

Why we will appeal the Tafelberg judgment - WCape govt

The only way out of this mess