Whom the Gods would destroy they first make mad

Whom the Gods would destroy they first make mad

The Monty Python world of the Zuma administration is back, in spades. This time, in addition to continuing rampant corruption, we have vacillating and incoherent government, and much that is febrile and hallucinatory in public debate. No doubt, the epidemic is part of the reason for this state of affairs. We maintain our sense of self and reality through interaction with others. Damaged interaction damages grip.

But the psychological effects of the epidemic are not the only, or even the main, cause of our distemper. More central is that the implicit assumptions behind government policies over the last 27 years no longer work, and they need radical revision. The concept of redistribution with growth emerged in the development economics community in the late 1970s, and it is certainly possible.

How to proceed in a period of economic decline is much more difficult and the beginning of wisdom is to avoid actions which make things worse rather than better. The purpose of this brief is to identify some of them. But first, a brief recapitulation of where we are, economically and fiscally.

ECONOMY AND FISCUS IN A PERIOD OF ECONOMIC DECLINE

The graph below summarizes the current situation and projection to 2023. It shows:

Real Gross Domestic product per capita is now below where it was in 2006 and, on National Treasury projections, it will remain so up to 2023.

The requirement for public debt to remain stable as a percentage of GDP is that the cyclically adjusted primary deficit should be zero. Roughly speaking, this means that the government consumption per capita line should have circled around the GDP per capita line. The graph shows how far the outcome has deviated from that in the past decade.

The result has been an explosion in the debt to GDP ratio. The profligacy of the Zuma administration left the country in a terrible position to weather the COVID epidemic storm, not to mention the looting of state enterprises which have turned them into supplicants for allocation from the Budget.

The objective of the 2021 Budget and Medium Term Expenditure Framework is to bring the two lines together again. Failure to do so will have two consequences: servicing debt will increasingly crowd out other forms of government expenditure and long term interests will remain high and quite possibly rise further, damaging the private sector investment necessary for the resumption of growth.

Fiscal consolidation is not a peculiar economists’ fetish on whose altar the poor are being sacrificed[1]. It is essential in their interests as well as those of everyone else. Loss of macroeconomic balance can lead to severe consequences, as witness the lost decade in the Latin America of the 1980s, or the much longer devastation in Zimbabwe.

The graph also indicates that fiscal policy will remain strongly stimulatory in 2020 and 2021. Combined with stimulatory monetary policy which has the real repo rate at 0.3% at present, it means that the Minister of Finance is correct when he describes the macroeconomic stance of the government as far from austere[2]. 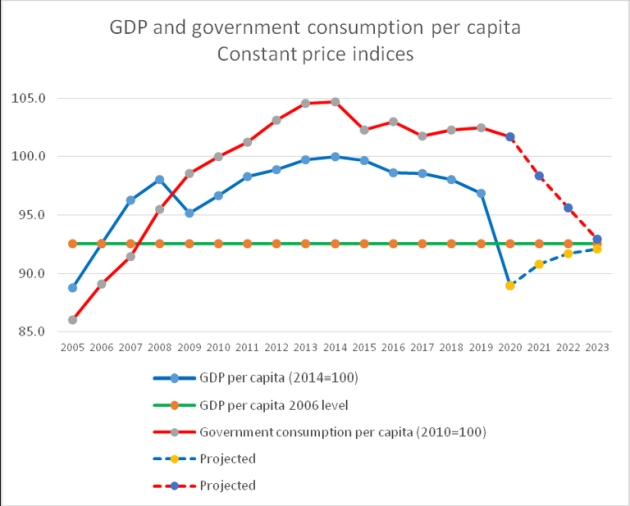 Imagine that the poor can be protected completely from the impact of economic decline.

Economic decline has simply been too long-standing and, more recently, too steep, and the poor are too numerous to make this possible. Recognition of this fact does not preclude efforts to limit the adverse impact to a minimum.

Make special appropriations which are not essential to the economy.

This is an immediate corollary of the preceding item on this list. The allocation last year to South African Airways is a case in point. Sceptics predicted it would not be the last. They were right. The 2021 Budget Review reported that an amount of R 6.1 billion (R 4.3 billion in 2020/21 and R 1.8 billion in 2022/23) is allocated to the airline for the repayment of government guaranteed debt.

Fail to keep Ministers and their deputies on message.

One appreciates the difficulties which President Ramaphosa may face in the ANC’s National Executive Committee. But as Head of State and Chairman of the Cabinet, he is surely in a position to insist that his Ministers remain on message. And it should have been apparent when the Budget was presented in Cabinet that its acceptance mean that Ministers would need to refrain for the time being from proposing projects entailing jaw dropping expenses.

But no. Instead, the Minister of Social Development said on Parliament on 12 March 2021 that South Africa should introduce a basic income grant once Covid-19 support measures conclude at the end of April[3]. A permanent basic income grant is simply not affordable for the foreseeable future. Neither, for that matter, is national health insurance.

Fail to appreciate the importance of credibility and time consistency in economic policy.

Macroeconomic theory has been pointing out the importance of both for the last forty years. If optimistic expectations to promote growth are desired, the government needs to stick to its fiscal decisions. Changing the decision about NSFAS funding within a fortnight of the tabling of the Budget undermines credibility and, as Carol Paton points out, promises of reprioritization are threadbare[4] when budgets are already cut to the bone.

The Department of Higher Education and Training will be back for more money in the adjustment budget. The 2017 Zuma decision on student funding was unaffordable and mobilized neither private sector funding nor students’ future earnings. It will have to be revised, with all the attendant political difficulties. Sow the wind, reap the whirlwind.

Continue to tolerate the poor value for money in the state procurement spend.

A reassessment is needed of the risks of creating rents in the form of higher than necessary payments for goods and services procured by the state, ostensibly for the purpose of developing new productive capacity. Rents attach rent-seekers, and they can, and do, appropriate the rent by simply sub-contracting work to non-preferred suppliers at market prices. There have been many cases of COVID procurements which illustrate the point.

The second problem arises from the allocation of work to people who cannot do it. As an example, take the Johannesburg Road Agency’s asphalt plant, acquired at a cost of R 50 million in 2017. MoneyWeb reported on 3 March 2021 that it had not produced a single kilogram of asphalt for over five months[5].

A report submitted to the City Council’s transport committee revealed that none of the JRA personnel were trained and certified in running and maintaining the plant, and there was an absence of competent and certified people to operate the plant efficiently. When corruption is thrown into the mix, the results can be staggering. Daily Maverick estimated that, of a R 255 million project to remove asbestos from Free State houses, work only to the value of R 21 million was actually done[6].

Shirk the task of building a stronger growth coalition.

One wonders, from time to time, whether most South Africans (though they would never admit it) deep down actually want the society we have. For those committed to something better, the building of a stronger growth coalition is imperative. The resources and energy are there, but their marginalization must end. That would require a shift in imagination, transforming our politics once again. Without a change at that level, we shall continue to drift towards a failed economy, a failed state.

[2] Mark Heywood, for instance, thinks that the Minister is ludicrously wrong on this point. See his Civil society organisations condemn Mboweni’s ‘sugar-coated’ austerity Budget 2021, Daily Maverick, 25 February 2021. But he is mistaken. Indeed, the macroeconomic stance may be becoming a little too stimulatory. The statement of the Reserve Bank’s Monetary Policy Committee in January 2021 states that their modelling indicates two repo rate increases of 25 basis points in the second and third quarters of 2021.

[3] Government wants a basic income grant for South Africa to replace COVID relief, BusinessTech, 14 March 2021. It is even odder that the Democratic Alliance should support it.

Who are the hungry children?

Alternative proposals for electing constituency representatives in a mixed system

The World Inequality Lab’s ‘A wealth tax for SA’: A critique (II)