He died on a dusty road-side in Rhodesia on September 3, 1979, cut down at the age of 58 by guerrillas firing Kalashnikov (AK 47s) assault rifles.

Now, nearly forty years after his death, the Archbishop of Harare, Robert Christopher Ndlovu, believes progress is being made which will see John Bradburne become Zimbabwe’s first saint and the first English person to be canonized for nearly half a century.

The campaign to have Bradburne beatified and then canonized is being led by his niece, Celia Brigstocke, 63.

And in his younger days, Zimbabwean author and historian Lawrence Vambe, 101, told me: “John was a wonderful man who served the poor, the sick, the wretched and who might one day be recognised as a very great poet.”

Bradburne’s life – but especially the way he was killed – has been the subject of intense debate in Roman Catholic circles for decades. Robert Mugabe was brought up by Jesuits and Marist Brothers at Kutama Mission and was a close friend of Archbishop Patrick Chakaipa, who did everything possible to delay the publication of an explosive report – prepared by Catholics - that linked Mugabe’s supporters to the slaughter of tens of thousands of men, women and children in Matabeleland(Gukuruhundi) from 1983-1987. *

The canonisation of a man murdered by guerrillas supporting Zanla (the military wing of Robert Mugabe’s Zanu (PF)) the year before the Rhodesian war ended was a sticking point between Mugabe and the Catholic hierarchy in Harare until recently. But with Mugabe gone and disgraced, the road leading to Bradburne’s canonization could become less bumpy.

So who was the man who could become the first English person to be made a saint in nearly 50 years?

Born on June 14, 1921 John Bradburne was the child of privilege, a cousin of the playwright Terence Rattigan and a distant cousin of Christopher Soames, Britain's last governor of Rhodesia. 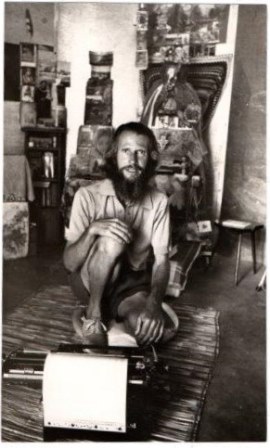 During the Second World War, he served with the 9th Gurkha Rifles and at the fall of Singapore he escaped to Sumatra after living wild in the Malayan jungle. Later, he went to Burma where he met a friend for life, the late John Dove , then a soldier who went on to become one of Rhodesia’s best known Jesuits and friend of black nationalists during the Rhodesian war.

Bradburne was a loose cannon, a social misfit and a remarkably good writer. He spent 16 years after the war’s end wandering between England, Italy and the Middle East, his belongings in a Gladstone bag. In a vision, he said, Christ told him to go to Africa and care for lepers. He wrote to his war-time friend, Dove, asking:” Is there a cave in Africa where I can pray?”

Bradburne turned up in Rhodesia in 1962, became a member of the Third Order of St Francis and was appointed warden at Mutemwa mission in 1969.

Joh Dove told me during one of my many visits to Mutemwa: “In John’s life he wanted three things: to work with lepers, to die the death of a martyr and to be buried in a Franciscan habit.”

The first wish came true at Mutemwa where Bradburne lived alone in a tin hut on the edge of the mission settlement, where he nursed about 80 blind and deformed men and women.

By the end of the 1970s, the war against Rhodesia’s white-officered army reached its climax and Bradburne came to the attention of Mugabe's hit-men.

On the night of September 2, 1979 he was abducted, accused of being a Rhodesian spy, put on “trial” and shot dead.

And, at his Requiem Mass, a strange – science defying – act took place which ensured the fulfilment of Bradburne’s third wish.

A friend placed three white flowers on the coffin. At the end of the service, three drops of blood are said to have appeared on the floor underneath the coffin. But when the coffin was re-opened, no traces of blood were found. Then something just as strange happened, in the eyes of those who believe in miracles. It was noticed that the dead man had been buried in a plain white shirt. But when it was removed, a Franciscan habit was wrapped around his body. And since then several people have claimed that after praying to John Bradburne various ailments of theirs– mental and physical – were cured.

Since his death, devotion to John Bradburne has sprung up in Zimbabwe and spread to other parts of Africa and is now significant in religious circles in Britain.

In 2007 Celia Brigstocke told me: “The John Bradburne Memorial Society raises about £30,000 a year to help keep Mutema running.”

In the post-Mugabe Zimbabwe the way is now open for a new appraisal, and possible canonization, of a remarkable man who did so much to improve the lives of men and women Pharisees and Sadducee’s avoided but who the founder of Christianity both embraced and kissed.

*From Liberator to Dictator – An insider’s account of Robert Mugabe’s Descent into Tyranny by Michael Auret (David Philip Publishers, 2009). For many years Auret was Director of the widely respected Catholic Commission of Justice and Peace.

Trevor Grundy worked in Rhodesia from 1978 -1980 and then in Zimbabwe from 1980-1996. He had written on religious issues in Africa and Europe for Religion News Service (USA), Ecumenical News International (Geneva), the Church Times, Catholic Herald, Jewish Chronicle, Huffington Post and the Washington Times.

Should Africa's looted art be returned?