Assessments of the presidential succession in Zimbabwe have ranged from regarding it as a military-party complex operation aimed at stabilizing dominance to seeing at as the beginning of a much brighter future. Much of the discussion has been conducted without reference to structural constraints and it is the aim of this brief to sketch key aspects of demographic and economic structure.

Population growth has been accelerating since 2000-2005 and is expected to start to taper off only in 2020-2025. One reason is that fertility has been slow to decline, although the total fertility rate (the number of children born per woman) is expected to decline from 4.0 in 2010-2015 to 3.3 ten years later. Another is the expected rapid rise in life expectancy from 2005-2010 onwards. The third is an estimated and projected tapering off of emigration, starting from 2005-2010. The result is a projected increase in population from 11.3 million in 1995 to 19.6 million in 2025.

Of importance, too, is the proportion of people living in urban areas. Figure 1 shows that it increased between 1998 and 2003, but declined after that for more than a decade, and is expected to remain constant between 2016 and 2022. This is an unusual pattern and it reflects in part anti-urbanization policies, notably Operation Restore Order, a large-scale campaign, starting in 2005, to forcibly clear slum areas across the country, with pressure to return to rural areas. The political motive was to weaken the opposition, whose strongholds were in the urban areas. 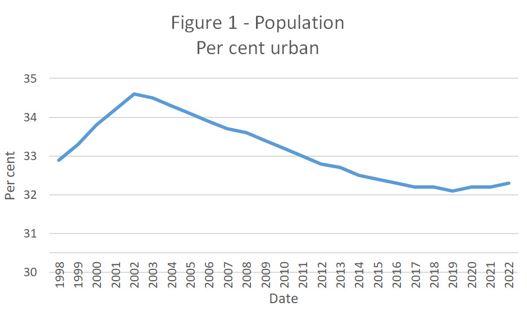 The following are salient economic features.

1. A decline in real per capita income. Figure 2 displays GDP per capita in constant 2011 purchasing power parity dollars. In 2008, it was just 48 percent of the level of 1998. It recovered between 2008 and 2014 but the International Monetary Fund’s estimates and projections are that it will decline again by 15 percent between 2014 and 2022. 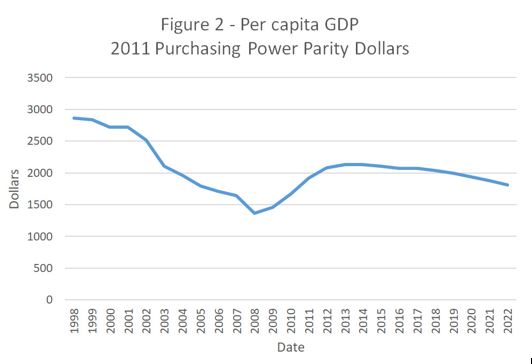 The public-sector debt-to-GDP ratio is projected to increase from 67 percent in 2016 to 80 percent in 2027. Stress tests to the baseline projection indicate that the deterioration could be much worse. The primary budget deficit ballooned to 8.1 percent in 2016, and is expected to be 4.8 percent in 2017. Budgetary operations are crowding out the private sector.

3. A fragmented and unstable monetary regime. Zimbabwe moved to a multi-currency system in early 2009, with the U.S. dollar, the rand, and other international currencies becoming legal tender. The regime was imperfect from the start, as the net external and fiscal positions were negative, the Reserve Bank of Zimbabwe was not adequately capitalized, the financial sector was weak, and liquid assets were scarce.

The multi-currency system became unsustainable, resulting in the introduction of three quasi-currency instruments to meet the demand for transactions: small denomination currency notes, electronic balances, and Treasury bills. The system is impossible to manage. The dollarization of the economy has resulted in an overvalued real exchange rate resulting in international trade compression, foreign exchange is rationed and allocated to domestic import substitution industries, exporters, and strategic imports, and parallel markets have evolved, with bond notes and electronic balances trading at a discount with respect to the dollar.

Expansionary fiscal policy has overheated the Zimbabwean economy, given its constraints. The required fiscal adjustment is large and implies considerable downward pressure on real wage rates in the public service. Both structural reform and access to greater external finance will take time to achieve, so it is not surprising that the IMF projects a drop in real GDP per capita over the next few years. The incoming administration inherits a greater economic mess than has been usual during the decade so far, and it is likely not to be able to deal with it adequately.

The fees report: An in-depth analysis

The Daily Insider: Mauritius is aggressively fishing our waters for immigrants