Woolworths positions must be open to all race groups - Solidarity

Trade union Solidarity will tomorrow at noon start a public campaign against Woolworths if the group does not withdraw job advertisements for which only black candidates will be considered. The campaign will be conducted mainly via social media.

In a letter sent to Woolworths today, Solidarity demands that the group amend advertisements for positions which are only available to "African Blacks" or "to Africans, Coloureds and Indians only" so that people of all race groups will be considered for the positions. Dirk Hermann, Solidarity's Deputy General Secretary, demanded in his letter to Woolworths that the group amend the advertisements before noon on Wednesday. Hermann informed Woolworths that the group is not correct in its implementation of the Employment Equity Act, and that its implementation amounts to unfair discrimination.

"The Employment Equity Act does not make provision for the exclusion of any race as far as applications are concerned. The current advertisements amount to an absolute quota, which the Act explicitly prohibits. The trade union has appealed to Woolworths to revisit its internal affirmative action policy to ensure that it does not discriminate unfairly against current or prospective employees of any race." According to Solidarity, the Act does not allow such discrimination, nor will public opinion tolerate such discrimination.

UNFAIR EXCLUSION OF CANDIDATES BASED ON RACE

The above matter refers.

We place the following on record:

1. Following a public outcry aimed at Woolworths' selection criteria for certain advertised positions, Woolworths made a media statement setting out its position with regards thereto. We quote the following section thereof:

"Like all South African companies, Woolworths has a role to play in transformation. For this reason, SOME positions (where there is under- representation) are designated for EE groups.

The designated groups are Blacks, Coloureds, Indians, women and people with disability.

As per the Employment Equity Act of 1998, Woolworths is expected, like all SA companies with more than 50 employees, to plan our work force by race, gender and disability.

Our workforce is diverse and includes people of all races (Black, White, Coloured, Indian), gender and disability."

2. We have in our posession at least one advertisement for a vacant position in Woolworths, exclusively designated for African black candidates. In this regard we attach the advert details for the position of Divisional Visual Merchandise Manager: Marketing - Head Office hereto.

3. From the contents of this advertisement it is clear that White, Coloured and Indian applicants are barred from applying for this position as the same is already designated for an African black candidate.

4. Woolworths' interpretation of the Employment Equity Act, as set out in the quoted section from its statement above, is both legally and morally wrong.

6. The practice of Woolworths excluding candidates from certain races from applying for vacant position, is nothing else than quotas. This setting of an absolute barrier on the basis of race constitutes unfair discrimination.

7. We contend that this application of affirmative action is not sanctioned by the Employment Equity Act.

8. Besides what is stated in the preceding paragraph, we are of the opinion that Woolworths will also be found guilty in the court of public opinion on account of its recruitment and selection process as described above.

9. In view of the aforesaid we request the following from Woolworths:

9.1 That Woolworths withdraw the advertisement attached hereto and mentioned in the preceding paragraphs before 12 pm on Wednesday, 5 September 2012 and ensure that the advertisement is amended so that candidates from all races are allowed to apply.

9.2 In addition hereto we request that all other positions that are currently advertised within Woolworths are screened to ensure and amended, if necessary, to ensure that candidates from all race groups are allowed to apply. In regard to this request we received written confirmation of Woolworths' actions in this regard by 12 pm on Wednesday, 5 September 2012.

10. We herewith place on record that, should Woolworths choose not to respond favourably to our requests mentioned above, Solidarity will launch a full scale campaign against Woolworths to mobilise public opinion and pressure in order to ensure that Woolworths adhere to these requests.

We await your most urgent reply. 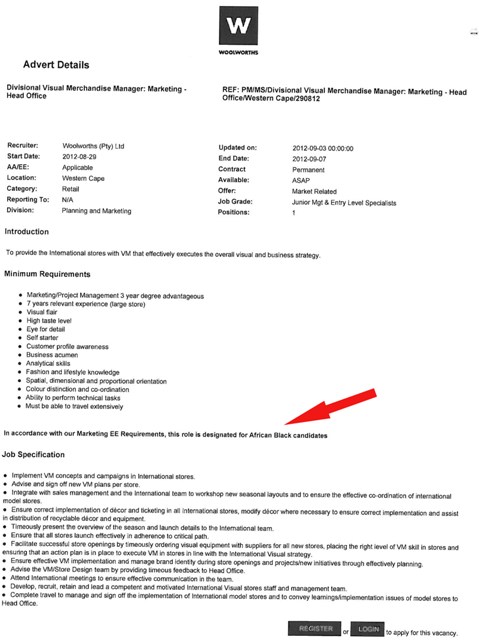 The path to building a new majority – John Steenhuisen

Property investing: Weighing up pros, cons of buy-to-live vs buy-to-let

"Salga gets pat on back from Ramaphosa: ‘Local govt has improved millions of lives’" - BizNews