Action taken as journalists continue to come under fire – SANEF

SANEF takes action as journalists continue to come under fire

The South African National Editors' Forum (SANEF) is pleased to announce that progress is being made as regards its legal case in the Equality Court initiated to protect journalists against harassment and abuse.

SANEF lodged a complaint in the Equality Court, late last year against the Economic Freedom Fighters (EFF) following a barrage of abusive and dangerous threats against journalists. SANEF approached the court in defence of media freedom and seeking the protection of journalists.

The court papers call for:

- The interdicting of the EFF leadership from intimidating, harassing, threatening and assaulting journalists;

- Interdicting the EFF leadership from publishing personal information of journalists on public platforms or on social media or by other means;

- Interdicting the EFF leadership from expressly or tacitly endorsing the intimidation, harassment, threats or assaults by supporters or followers, whether on public platforms or on social media or by other means;

- Directing the EFF to publicly denounce the harassment and abuse of journalists; and

Please see here for the full set of papers.

After initial delays with the case, SANEF has been informed that Judge Hughes will be hearing the matter and that the following timeline has been agreed to:

SANEF sees progress as regards this case as critical given the ongoing harassment of journalists. In this regard we note the most recent chilling case of harassment of investigative journalist, Pauli van Wyk in the wake of her hard-hitting stories on the EFF and VBS Bank. We note a tweet by Julius Malema communicated to his more than 2.4m followers. He didn’t elaborate or name any individuals, but the timing pointed to a veiled threat. He called for his followers to “go for the kill” and to “hit hard”. 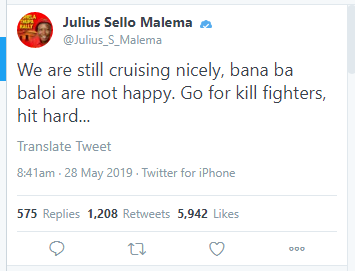