Company says it will be initiating the appropriate internal disciplinary processes over the matter (Update: Hart suspended)

As such, Standard Bank Group distances itself from comments made by Chris Hart on Twitter on 3 January 2016. The comments made by him are factually incorrect, make inappropriate assumptions about South Africa and have racist undertones.

We expect our colleagues in every country to at all time reflect the values of Standard Bank Group.

There are internal processes that need to be followed should any employee be suspected of not reflecting these values. This process too has to respect the rights of everyone involved in any possible violation. We also need to follow relevant laws of the country in which the employee is employed.

Here is information around our code of ethics and how to report infringement.

Standard Bank has suspended Mr Chris Hart pending an inquiry into the events of his commentary on Twitter on Sunday 3 January. The inquiry will be conducted in line with the bank’s established protocols and its obligations in law. Standard Bank has distanced itself from the comments made by Mr Hart, the outcome of the inquiry will be communicated once the process has run its course. 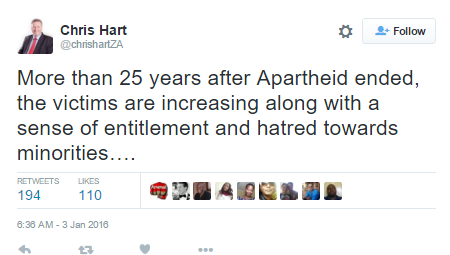