Daily Sun (April 22 2014) - THUGS rape and kill women every day. But this evil laaitie picked the wrong woman. SHE KICKED HIS 4-5 AND FOUGHT HIM UNTIL HE RAN AWAY!

Christina Ndlovu (42) told the People's Paper how she was about to wash and go to bed on Sunday last week.

She recognised the local loafer when he grabbed a knife off her table - and aimed it at her eyes.

He knew Christina lived alone and took her for an easy rape victim.

But he was shocked when she quickly proved him wrong.

Christina said: "I had to fight him.

"Women are raped every day. I wasn't going to let him rape me."

Christina said the man told her not to scream or he would cut her eyes out.

Christina said the man grabbed her as she reached for her door.

"He pinned me on the floor, punching my face, but I fought back," she said.

Christina said the man kept saying he had been trying to get her attention but she kept ignoring him.

"I have seen him before in the yard, gambling with the other boys who rent here, but we never spoke."

Christina said the man tried to stab her but she blocked the knife with her pillow.

"He jumped off me when someone walking past heard us fighting and knocked on the door," she said.

That's when her attacker ran away. Christina said that although she fought her attacker off, she was living in fear.

He sent her an SMS threat a couple of days later, saying he would return for her if she went to the police.

"I am scared to stay here because he's still hanging out with his friends. And I am scared to go to the police because the next time he comes he will make sure I'm dead," said Christina. 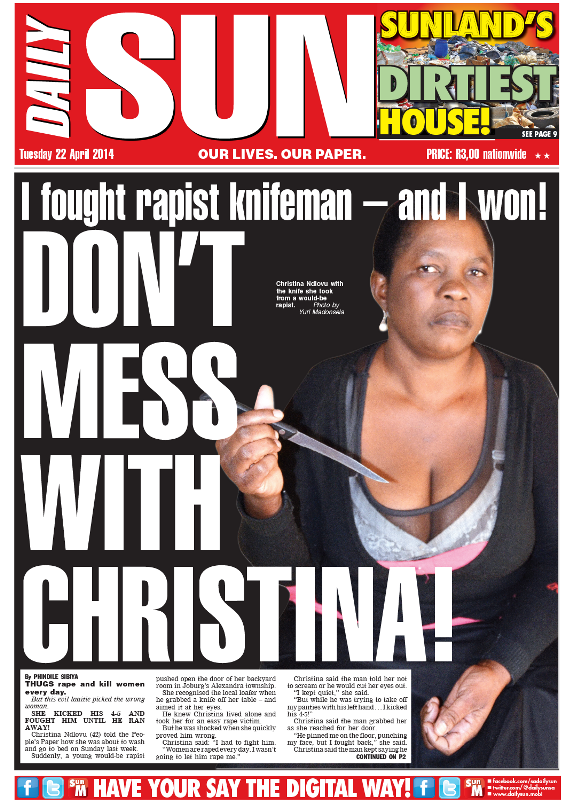 The Daily Sun is South Africa's largest daily newspaper with an average circulation of 297,614 (Audit Bureau of Circulations 4th Quarter 2013) and a readership of 5.7m (as per AMPS 2012ab). Its Facebook page can be accessed here. It can be followed on Twitter here. To find about advertising on the Daily Sun click here.

"My dead Bhekani is alive! But whose son did I bury seven years ago, asks mum" - Daily Sun