I wrote the ANC doesn’t understand economics. While the DA appears to have an overall better grasp of the economy, it’s spoilt by recent naive or misleading statements by senior politicians which makes me wonder if they understand it at all.

In a recent statement DA leader Mmusi Maimane claimed the DA-led Western Cape created 487 000 jobs since 2009. As they often do, they take credit for the province having the country's lowest unemployment rate, which actually is mostly beyond their control. This publicity statement is typical: "The DA-led Western Cape is on the right track to creating opportunities for economic growth and jobs".

Maimane: "Since 2009 when the DA was elected in the Western Cape, 487 000 net new jobs have been created by the DA-led government. That is why unemployment is the lowest in the country" (emphasis added).

The province is part of a unitary state and must adhere to national policies and an economic environment that affects work, production and employment. While regions and cities can encourage investment in individual cases, investors look at a package of national and regional conditions including economic fundamentals before making a long-term commitment.

While the Western Cape has competitive advantages, as a whole South Africa is not an investor-friendly destination, which is one of the main reasons why national real growth is negative and in the first quarter 2018 was -2%, the largest drop in recent times, indicating a lack of business and investor confidence, lower production and consumer belt-tightening. 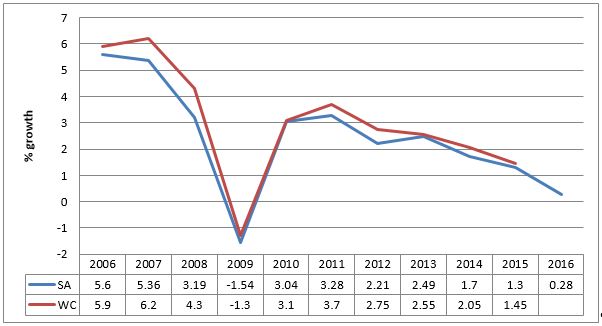 The 487 000 “new jobs" is a blunt and misleading figure without considering other data like the population growth and economic growth rates, number of new job entrants, etc compared to national rates over the same period.

A true indicator of economic growth, development and unemployment are provincial unemployment (Western Cape’s Q1 2018 is 19.7% and 24.7% real – still high and only slightly lower than national 26.7% and 36.4%) and GDP growth rates.

In Q1 2018 South Africa's GDP growth was -2.2%. SA's GDP growth declined from 2011 (3.3%) to 0.8% (2018), or 1.6% moving annual average (my calculation). Western Cape’s tracks national rates and is only a decimal point better. (Note I prefer “real” to describe expanded unemployment that includes discouraged jobseekers. If there’s no work, it’s a statistical sleight of hand to exclude them from the “official” definition.)

Another way of rebutting Maimane’s statement is that like South Africa, the Western Cape is experiencing negative real economic growth. Per Statistic SA's population estimates for 2009 the Western Cape's population was 5 356 800. In 2017 (mid-year estimates; it will be greater today) it was 6 510 300, an increase of 1 153 500. (Incidentally, for the estimated provincial migration streams 2016-2021, Western Cape’s net migration (in minus out) is 309 729. Gauteng’s is 1 050 230, showing it’s still the destination of choice for economic and other opportunities.)

From 2009 to 2017 its population grew 22%, or on average over 2% a year (I can’t verify the veracity of this source 2001-2011: +2.56%; 2011-2015: +1.58% but it seems fair). For that period economic growth for the country and province – Western Cape’s economic growth rate is only slightly better than SA's – was an average of around 1.6% a year and declining (see graph), i.e., the Western Cape’s population is growing faster than its economy and job creation, which paints a completely different picture to the DA’s excessively optimistic outlook.

So, the Western Cape's figures are not extraordinary compared to national rates (Limpopo’s unemployment is about the same); even on their own they're depressing. The DA should know this and without putting it in context, is deliberately misleading readers who may not interrogate or understand economic data.

In this light a net job increase of 487 000 is not remarkable and way below what it should be. (Note like everybody else the DA gets information from StatsSA. Readers are encouraged to verify bald and questionable information by searching its website.)

On a related matter, shadow higher education minister Belinda Bozzoli recently claimed higher education and skills shall lead to job creation and economic growth. In her first statement about the failure of government funding for students she said, "We will never begin to resolve the unemployment crisis if students are being let down in this manner. Close to 10 million people is without jobs, and that number will continue to increase if this funding matter is not resolved." In her second, "The DA believes that investing in higher education will translate to more job opportunities and guaranteed economic growth".

She’s conflating separate matters. A complex, but well-understood, host of issues are causing high unemployment like persistent low and negative real growth rate, which in turn is caused by regressive economic policies and anti-competitive and oligarchic industrial and commercial practices. (I don’t consider global issues to be a significant problem, as the ANC government alleges, because peer and less developed countries are succeeding with high growth rates.)

It's not primarily due to problems in education although that might play a part. In fact, the country doesn't have a skills shortage but an excess of unemployed and underemployed skills including the elderly unemployed (50 years and over), in their case due to forced retirement and retrenchment. It has a skills mismatch, i.e., too many or too few skills than is needed at a particular moment.

Note graduates in engineering, science, technology and business – STEM disciplines – account for over 50% of all graduates.

It's concerning that like Maimane, Bozzoli appears not to understand the macroeconomic environment and conditions for job creation and economic growth (they’re not the only politicians, though; the ANC’s, EFF’s and politicians in general are clueless). They ought to know better unless there's a deliberate attempt to mislead.

I dealt with the skills, jobs and growth conundrum in this article. Skills alone don't translate into jobs and economic growth but entrepreneurship, innovation and investment. Labour (skills) is an input into production like capital. It's a resource which without entrepreneurship and the idea or product that leads to industry, and thus economic growth and development, will remain redundant.

Let me put it this way: if a motor vehicle in toto is the economy, the transportation network is policy and economic and business environment. Getting to the destination is growth and development. The engine is the entrepreneur and his idea, innovation and product drive the vehicle. Fuel and oil is investment capital. Labour and skills are the wheels or other important components. The last don't drive the vehicle, the engine does.

Can there be economic growth without a skilled workforce (not considering increasing automation)? No. In economics skill is a synonym for labour, and jobs/work is the productive use of labour. But saying labour creates jobs – or labour creates labour – as Bozzoli et al mean is fallacious, circular reasoning and indicates a complete misunderstanding of how economic wealth is created. Perhaps it’s expecting too much of politicians to understand the mechanisms, though.

South Africa already spends 20% of its budget on education and its return is poor. Many TVET students get full bursaries but do poorly academically. Throwing more money at problems, like she and government want to do, is a politician's response to everything. It’s easy when someone else – taxpayers – are paying.

Of course education is essential for economic growth and development over time. But a fly in the ointment is there's existing graduate unemployment and a huge surplus of labour (36% real unemployment) and real negative growth (population growth exceeds economic growth), which won't change for a long time to come.

And post-1994 South Africa has gradually been de-industrialising with manufacturing, traditional employers of artisanal skills, now accounting for only about 13% of GDP from over 20%. So I disagree that under the present conditions there's "guaranteed" economic growth and job creation.

I get irritated with "experts", academics, politicians and journalists who confuse and conflate issues and often mislead the public. They're in positions of influence and are supposed to have the facts. The lay public may take what they say and panic or arrive at the wrong conclusions. One frequent misconception is confusing poverty and inequality as if they mean the same when it's not. The factors causing employment and growth are another.

It's not the public's job to advise them. They must either employ better advisors or research the subject properly before opining. They ought to know there's no magic bullet for the economy but well-known, difficult, hard-to-accept structural reforms and measures they – political and business leaders and unions – refuse to adopt which ceteris paribus are guaranteed to bring results within 20 years. The success stories are there – look at Ireland, Ethiopia and Vietnam.

While the DA is not responsible for the country’s grim economic situation, they cannot really take credit for the Western Cape’s either except in a limited way because they don’t control economic policies and the industrial model. In the meantime, they must desist with bromides and alt-facts.

This article is expanded from previously posted comments.

The De Lille scandal was a long time in coming

Limitations of the Sugar Tax