Over the past 24 hours, a flurry of viciously antisemitic and threatening attacks have been made against South African Jews, both on social media and in direct face-to-face encounters. The incidents, which are being followed up by the SA Jewish Board of Deputies (SAJBD), have generated great anxiety and anger in the Jewish community and screenshots of the offending posts have gone viral.

SAJBD Chairman Shaun Zagnoev said that while it was unfortunately common to find antisemitic content online, it was rare for it to take so virulent and inflammatory a form as the latest reported comments.

“The posts show how easily radical anti-Israel sentiment can spill over into hateful slurs and threats against Jewish people in general. We are being told that we are ‘scum’, ‘rats’, ‘bastards’, ‘pigs’, ‘swine’ and ‘fat-nosed f***ks. We are further being warned that “our time is coming” and that “the Holocaust will be a picnic after we are done with you”.

Furthermore, earlier this morning, passengers awaiting their luggage from an El Al flight into South Africa were verbally abused, and called “wicked Jews”.

A mural with a German flag, with a swastika inserted in it, also appeared this morning in Hamilton Street, Coronationville, in Johannesburg.

Every single one of these incidents is not only at attack on the Jewish community, but an attack on our very democracy. Racism has no place in this country.  And certainly, any minority group is protected by the Constitution, which protects our freedom of expression and association.   It is no co-incidence that these antisemitic comments are coming after the very public humiliation and “re-education” of model Shashi Naidoo for expressing her support for Israel.  It would appear that those who support Israel are now “legitimate” targets for attacks.

The vast majority of South African Jews are overwhelming and proudly South African, proudly Jewish, and proudly Zionist.  We will not be intimidated by these attacks and we call on every single South African who is opposed to any form of racism and who values democracy and freedom of expression to say “enough is enough!”.  We need to condemn politicians who whip up racism and we need to condemn extremist groups who intimidate and harass individuals who are vulnerable and express an opinion that doesn’t agree with theirs.  There is simply no place for hate in our country. 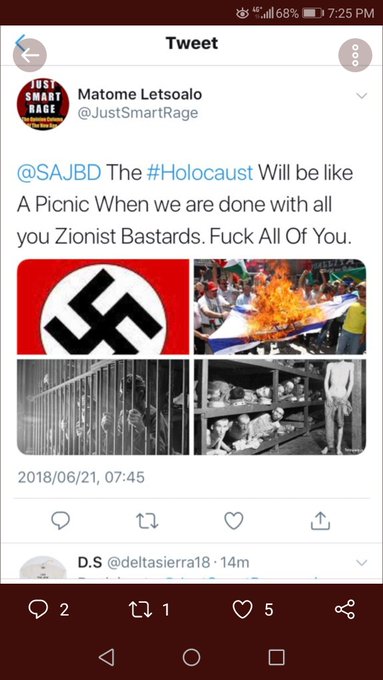