DA MP says these were launched with much fanfare by ECape health authorities, and Zweli Mkhize himself

Health Minister Zweli Mkhize’s attack on the Democratic Alliance (DA) for drawing attention to the suitability around the Eastern Cape Health Department’s scooter ambulances is an outright attempt by the Minister and his department to evade accountability.

As the official opposition, the DA has a responsibility to hold government to account and to draw attention to areas where they are failing. This is exactly what the DA has done and we will not be relegated to a passive opposition because of the ANC’s inherent disdain for accountability.

However Minister Mkhize tries to spin this, the facts are that these inadequate scooters were intended to transport patients and was launched with much fanfare by Eastern Cape health authorities including the Minister himself.

According to Minister Mkhize’s parliamentary response, "the purpose of the project was to widen access to primary health care and deliver chronic medicine in remote areas of the Eastern Cape". This, however, is in direct contradiction to his own comments on Twitter that the purpose of these scooters was also to "transport patients in rural communities" on 12 June 2020. 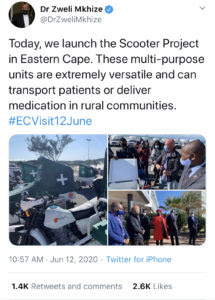 Now that the Minister and his department have been caught in a contradiction,  he is attempting to divert the public’s attention away by launching a personal attack.

The DA maintains that these R10 million glorified wheelbarrows represent the inept leadership in charge of health care in the Eastern Cape. The province’s entire system has collapsed, even before the pandemic wreaked havoc. And, while desperate and dying patients now have to sleep on floors without any hope of proper health care, the Minister would rather engage in a fight instead of taking up the dire health situation in the province.

The Eastern Cape’s Covid efforts have been a disgrace and a testimony to how people's lives have become worthless amidst ANC-mismanagement.

Death by Covid-19 in the ECape - NLS Kwankwa