Severe cold front expected to sweep across country from Monday

South Africa welcoming winter with snow from Monday, 25 May 2020

South Africans can expect a chilly start to the coming week as surface temperatures are expected to drop significantly on Monday, 25 May 2020 into Tuesday. Adding to the recent two snow events over the Eastern Cape and Lesotho, which included QwaQwa in the Free State during the second event, the mountains of the Western Cape and the extreme south-western areas of the Northern Cape are about to experience the first snow of 2020.

The weather system responsible for the expected winter weather is an intense cold front which will be supported by a steep upper trough from Sunday night, 24 May 2020, bringing rain showers to the south- western areas of the Western Cape. Ahead of this cold front, windy conditions are expected over most areas, with strong to gale force north-westerly winds (50-70m/h) over the interior of the Western Cape.

The frontal system will introduce wintry conditions on Monday, 25 May 2020 and bitterly cold daytime temperatures are expected to spread eastwards over the Cape provinces. Communities living in the extreme south-western areas of the Western Cape should also brace themselves for a combination of cold, strong gusty winds as well as moderate rainfall.

Numeric modelling currently suggests rainfall of the order of 5 to 15 mm over parts of the Western Cape, while mountainous areas are likely to experience more significant falls, possibly 20 to 30 mm (refer Figure 1). There is also a potential for localized flooding in places. 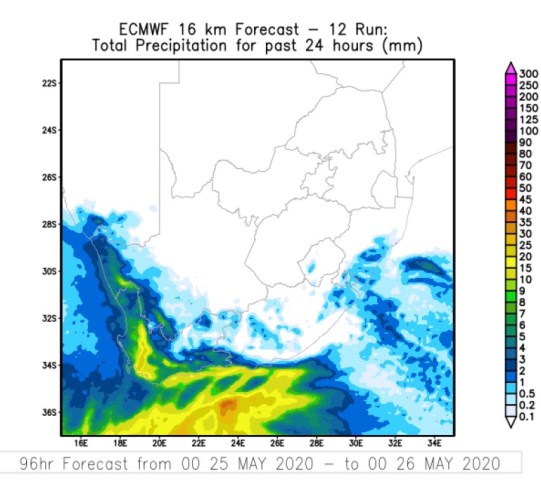 Further afield, cold conditions are expected to set in over Lesotho, the Free State as well as the southern and south-western parts of North West province during the course of Monday. On Tuesday, 26 May 2020, snowfall is expected to spread to the central and northern interior of the Eastern Cape (refer Figure 2). During Tuesday 26 May 2020, widespread bitterly cold daytime temperatures are expected over the entire interior, including the Cape provinces, Free State and southern KwaZulu-Natal (KZN) (refer Figure 3).

Even the southern parts of Gauteng are likely to be cold and windy on Tuesday. Snowfall is also likely to spread to include Lesotho, QwaQwa and the KZN Drakensberg mountains. While many will be excited to see snow, the South African Weather Service nevertheless strongly encourages the public to refrain from travelling to snow sites amidst the Covid-19 pandemic and the current lockdown regulations. 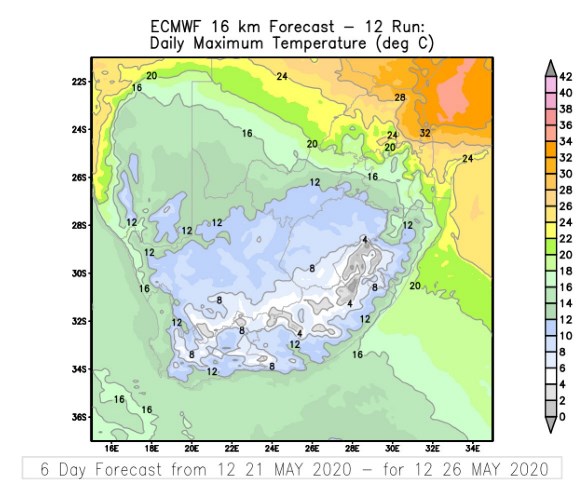 Temperatures are expected to recover gradually over the Cape provinces from Wednesday, 27 May 2020 onwards, although widespread morning frost could also be expected over the interior areas.

The South African Weather Service will continue to monitor any further developments relating to this weather system and will issue subsequent updates as required. Furthermore, the public are urged and encouraged to regularly follow weather forecasts on television and radio.

Updated information in this regard will regularly be available at www.weathersa.co.za as well as via the SA Weather Service Twitter account @SAWeatherService.

Statement issued by the South African Weather Service, 22 May 2020

Help us prepare for the coming winter - Politicsweb

SAns needs to use electricity efficiently in winter – Eskom

The dying of the old ANC

This is who received WCape Covid-19 contracts - David Maynier

The last honest man in the ANC