On Thursday the lead story on the News24 website was “Farm murder rate lowest in 20 years, 'remoteness' the reason for brutality.” The report itself lead with the claim that:

“Farm murders have decreased to their lowest level in more than 20 years, a report by agricultural organisation AgriSA has found. Despite controversial statements from organisations such as AfriForum and right-wing doomsday preppers Die Suidlanders that farm attacks and farm murders were out of control, AgriSA's figures, which are based on police statistics, its own research and media reports, show a slight increase in farm attacks.”

This story was republished in the Mail & Guardian and Huffington Post SA and, as usual, widely circulated on social media. Apart from confusing a rate with a number the headline claim is dodgy. It is based upon the following graph that appeared in the Agri-SA release: 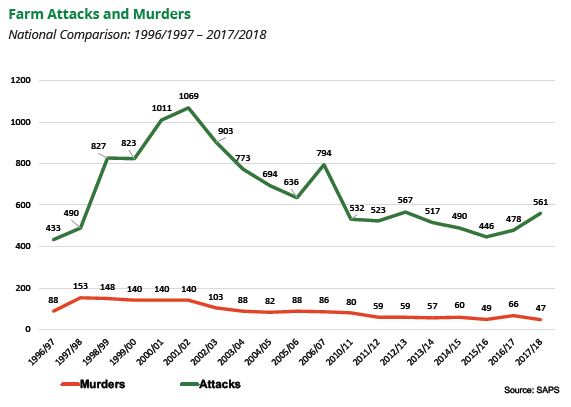 One reason to regard these figures with considerable caution is that they are contradicted by earlier figures released by SAPS. According to these, the number of farm murders nationally increased from 58 murders (not 49) in 519 (not 446) incidents in 2015/16 to 74 murders (not 66) in 638 (not 478) incidents in 2016/17. The discrepancy between the two sets of figures has yet to be explained. Another is that many of the provincial figures for 2017/18, which total up to 47 nationally, are implausibly low. These were given by SAPS as follows: 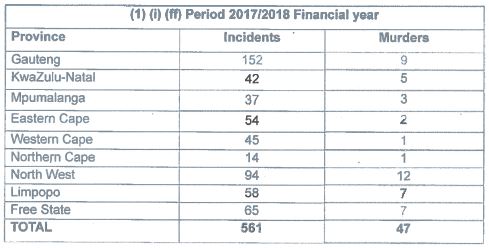 Anyone who has been following the news on farm murders would immediately regard some of these numbers as red flags. To take the three easily most checkable provinces:

1. Joubert Conradie was shot and killed on his farm Klapmuts in October 2017.

2. In January this year Martin Louw was fatally stabbed in his house on Wolwefontein farm, Tulbagh.

That is two farm murders – both of which received huge publicity in the press - where the SAPS records only one.

This brings the proper total to 48.

1. Danie “Kat" Fourie was murdered on his small holding in the Soeding area near Kuruman in November 2017.

2. Piet Els died of his injuries in May after being brutally assaulted during an attack on his farm near Kimberly in January 2018.

3. Athol Harvey eventually succumbed to his injuries after being attacked on his farm, Weltevrede near Spitskopdam outside Barkly West, in February 2018.

That is three farm murders where the SAPS figures record only one.

This brings the proper total to 50.

1. In April 2017 Piet van Es was murdered in his house at Moseley farm on the R40 outside Barberton.

2. Dries Schoeman was attacked and robbed on his farm in Waterval Boven in June 2017. He succumbed to his injuries the following month.

3. In August 2017 Anton Smuts was shot and killed in his bakkie, which was then set alight, on his farm in the Kinross and Leandra area.

4. Hoedspruit farmer Christo Redelinghuys was shot and killed on his farm Jonkmanspruit in November 2017.

5. In December 2017 Gunther Prigge was killed in a shootout with a gang on his farm.

6. In January 2018 Dries Steenkamp was shot and killed by intruders on his farm near Lydenberg.

7. In February 2018 Hans Meyer was shot and killed on his farm Vögelvlei in the Charl Cilliers district.

8. Also in February Hantie van der Vyfer was murdered on the farm Welgelegen between Chrissiesmeer and Ermelo, where she lived alone.

That is eight farm murders reported in the press where the SAPS figures record only three.

This brings the proper total to at least 55.

Given that a brief news search could establish eight cases missed by the SAPS the true under-count must be  substantial. The SAPS figures should also be more not less comprehensive than press reporting.

The News24's headline then is based upon a SAPS figure which was implausible to begin with, and which is provably wrong. 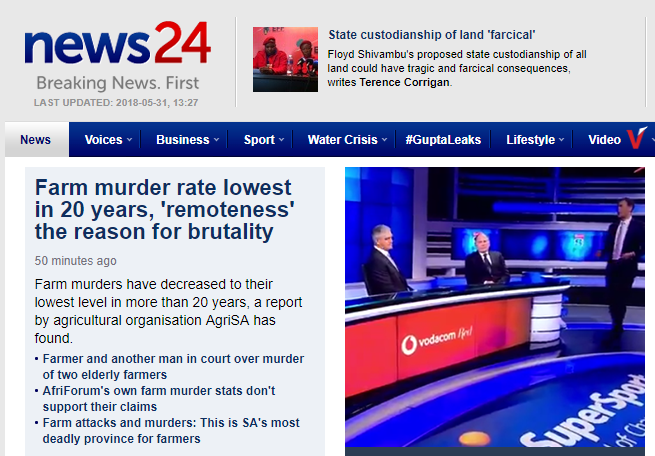 PANDA responds to Geffen’s hit-piece on PANDA and its co-founder, Nick Hudson

Evergrande fallout could lead to financial contagion in the Chinese economy