They came to this country. They massacred our people. They killed all those who were there when they arrived in Cape Town, in the Eastern Cape, in KwaZulu-Natal. They continued to institute apartheid, killing Hector Petersen, killing Robert Sobukwe, killing Chris Hani, killing in Sharpeville, killing in Boipatong.

Why then do White People in this country still feel they are the bosses? Why do they still view us like animals? Because they still have our LAND!...

Actions like this, at the beginning of this year Comrades, when the year began, they took to Facebook, calling us animals, in December, they said we are monkeys. People like Penny Sparrow. And they have the defence of many of their leadership there in Parliament. And the reason why they continue to be arrogant, the reason why they continue to look down on you, they are not afraid to treat black people as if they are nothing. Because all of us – ALL OF US! – still live here, in our own country, as if we are visitors. We still beg jobs from them. We still beg sugar from them. We still beg shelter form them. That is why they continue to despise us. THAT IS WHY THEY WILL NEVER RESPECT US! THEY WILL NEVER RESPECT US!

They say Commander in Chief is inciting violence. Commander in Chief says to them ‘You slaughtered Black People in order to take this country. We should be slaughtering you! We should also be calling for white genocide. We should be calling for white massacre. We should be arming all of you! That you go and take revenge! But we are not doing that!’ Nobody has called for a white massacre. Nobody has called – none of the African leadership – has said to our people ‘Go and take revenge!’ We are not saying that! We are not saying that! You will not find any of our leaders asking for revenge. Yet when we say ‘Bring back the land!’ they say we are inciting violence….

- EFF spokesperson Mbuyiseni Ndlozi speaking to a crowd outside the Middelburg Magistrate’s Court, Mpumalanga, where Theo Jackson and Willem Oosthuizen where appearing on charges relating to assaulting Victor Mlotshwa and forcing him into a coffin, a 20 second video of the incident having gone viral on social media. Source: YouTube.

South Africa Coffin Attack: Horrific Video Sparks Protests Against Racism – Huffington Post Canada’s headline on its report on the case, one of hundreds of international news reports on the incident.

Black people make up 80 percent of South Africa's 54 million population yet most of the economy remains in the hands of white people, who account for about 8 percent of the population. – Reuters report on the case.

The two raggedy white males who taunted and terrorised Victor Mlotshwa and forced him into a coffin that they threatened to set on fire were acting in the name and on behalf of all white people. In their acts of racist violence, they reassert whiteness as a privileged social identity and reinforce the never-ending social misery of Blacks. - Joel Modiri, The Daily Maverick. 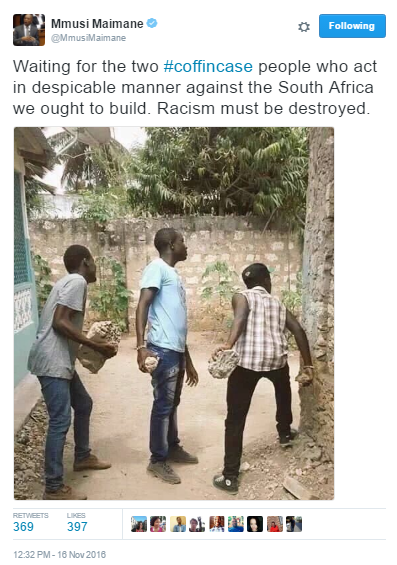 Waiting for the two #coffincase people who act in despicable manner against the South Africa we ought to build. Racism must be destroyed. – Comment on Twitter by DA leader Mmusi Maimane above a picture of three men holding large rocks.

So, no law that seeks to protect White People will succeed in a democratic South Africa. They say I said in Newcastle we must slaughter White People. I never said that. If I wanted to say it I will say it. What I said was we are not calling for their slaughter. Unlike them, they SLAUGHTERED Black People. They killed Black People. They committed Black Genocide….

Afrikaner boys, the poppe sal dans! The EFF is coming for you boy! Afrikaner boys, the ANC has made you to think this thing is still Orange Free State. This thing is not Orange Free State. This is Free State. When we take over power, Afrikaner males you will know your place! Just pray, pray to ancestors, pray to Malan, pray to Verwoerd, pray and ask them for EFF not to come into power. Because we come into power ‘Afrikaner male this side! This is where you belong. This is how you are going [unclear].’…

So… I see a lot of White People crying. Stop being cry-babies! There is no one who is going to kill you. I have got one white friend called Andreano. So if we were to kill white people I would have to start with Andreano. So I won’t do that. So stop being cry-babies! You are scared because you know what you have done to us! You are TROUBLED BY WHAT YOU HAVE DONE TO US! And you think we are like you! WE, are not like you! We are not like you! Don’t push us too far! This country must be returned into the hands of rightful owners.

- EFF leader Julius Malema speaking outside the magistrates court in Bloemfontein after his appearance there on charges of incitement.

In the pain of transformation, reports of arrest, and the charges faced in the magistrate’s court, Malema once again tapped into the anger over how little the country has changed since democracy…. As usual, he walked a fine line on white South Africans, speaking harshly against them, in the language of the struggle, while stopping short of promoting violence…. On Monday, the EFF leader was at points screaming into the microphone. He’s hit the right pitch, with the right topics, at the right time. Whatever side of the political spectrum, including the ANC, no one is happy with the pace of change in the country. Everyone, even the DA, recognises that the economy and culture remains racially biased towards whites. … Malema is still the best and often only political leader to voice the pain of an unfulfilled transformation, and as the ANC continues to fall, more and more people will listen. - Greg Nicholson’s assessment of Malema’s Bloemfontein speech. Daily Maverick.

For black people certainly have a place for whites in the stories of SA they tell, and what they often see of white people is a bunch of people without the moral courage to acknowledge their place in the story. I hardly know Graham, but my guess is that among the things he was fleeing was what black people see when they see white people. Which is another way of saying that the Mandela era of reconciliation did not begin to do the work it promised, which was to create an environment in which white and black people might tell stories about one another that everyone could find tolerable. - Oxford-based academic Jonny Steinberg on the apparently inexplicable decision by a well-educated young white South African he met to work as a waiter in Sweden rather than be in SA. Business Day.

That is what going home means for me. It is to stand outside myself and watch my bourgeois life prodded and pushed and buffeted around by lives quite unlike my own. It is to surrender myself to a world so much bigger than I am and to the destiny of a nation I cannot control. In this surrender is an expansion, a flowering, of what it means to be alive. - Steinberg trumpeting his (soon to be reversed) decision to return to South Africa to take up a prestigious and high paying position he had been offered at Wits University in a February 2015 article titled “Why I am returning to South Africa”.

You do know, don’t you, that the whole notion of the black-white social construct served as an ideological underpinning for all that happened during colonialism and apartheid. To absolve himself from possible guilt stemming from what he intended doing – killing and enslaving blacks – the white man first had to denude the black man of his humanity. Having done so, he could then proceed to exploit blacks whichever way he pleased, secure in the knowledge that he was not dealing with fellow human beings, but creatures undeserving of human mercy. This is a country still dazed by more than 200 years of colonialism and apartheid…. White man, you are on your own. Eat your share, until your stomach is bulging. Then perhaps you will vomit out the poison of the past, because it is that venom that still gives you the gall to think you are so grand and special, and that your suffering is deeper than that of everyone else.

- Fred Khumalo responding to an article by Stephen Sidley asking whether white South Africans were still welcome in the land of their birth. City Press.

This motion against President Zuma, in whichever way it may be put, seeks to have us ignore the fact that the majority remain without access to land and remain spectators in an economy largely controlled by a minority elite that is opposed to transformation, masquerading and led by a black face. Those elitist forces emerge, as led by the DA, to advance a protracted onslaught against the President and government, on speculations and unfounded sentiments. This is manifested in the DA's ideological drive that aims to keep intact the apartheid economic patterns. This is a glaring misrepresentation of facts and a total disregard of reality. –Minister of Water and Sanitation Nomvula Mokonyane in the debate on the motion of no-confidence in President Zuma.

… the fact of the matter is that such patience does not exist among those eager to dispose of the ANC in order to defend racial privilege and supremacy. The truth is that there is a bitter struggle in South Africa between the former oppressors and those whom they had oppressed, for the right and power to determine the political direction of this country as well as the ownership of its economic resources. At best, this motion is merely about political point scoring, but at worst, it is characteristic of the abhorrent ploys by the global empire and their local political hoodlums under guises of good governance and defending the Constitution and the rule of law to steal political power in order to defend, protect and advance their exclusive economic interests. – Home Affairs Minister, Malusi Gigaba, in the same debate.