This brief is the first in a series which will discuss the circumstances in which young people live.  Some briefs will be supported by technical reports which set out additional detailed information for those interested in it.

Two Department of Basic Education policies shape enrolments in Grades 10, 11 and 12, and the National Senior Certificate:

- The norm that learners should spend a maximum of four years in Grades 10, 11 and 12.  This implies a maximum of one repeated grade.

-  As many learners as possible should pass the National Senior Certificate.

A decision about every learner in Grades 10 and 11 is taken at the end of the year.  In order to be promoted, a learner has to pass three subjects (at least one of which is an official language at the home language level) with at least 40%, and a further three at the 30% level. A learner who fails to meet the promotion requirement for the first time repeats the grade. Progression is an option once a learner has repeated once. Progression requires 30% in the language of teaching and learning and in three other subjects, as well as regular school attendance. What happens to a learner who has repeated once and fails to meet the requirements for progression is not clear. Grade 12 may be repeated by learners who fail the National Senior Certificate on the first attempt.

There are eight possible ways in which a learner can complete Grades 10, 11 and 12 in a maximum of four years. [1] Three of them entail progression into Grade 12.

3. The forms and requirements of the National Senior Certificate

The first variant is the Endorsed National Senior Certificate. This is available only to learners who have one or more specified learning difficulties.  Learners must offer five subjects: an official language at the home or first additional language level, mathematics or mathematical literacy, life orientation and two other subjects.  The requirement for a pass is a mark of at least 30% in each subject. Very few learners – 154 in 2015 and 125 in 2016 – pass the Endorsed National Senior Certificate.

In addition to ordinary school tuition, assistance is offered to categories of candidates as follows:

Information and Communications Technology. This takes the form of TV and radio broadcasts and internet programmes, available to all candidates.

Progressed learners during Grade 12. Autumn and Winter Schools are offered to these learners, as well as additional in-school instruction.

Progressed learners who elect to take some of their examinations in June and Amended Senior Certificate learners. 30 hours of face to face instruction between April and June are offered to these learners.

Part-time candidates. 30 hours of face to face instruction in August and September are offered to these learners.

All these interventions are offered free of charge.

- Full time non-progressed passes in the November examination among candidates who have not repeated Grade 12.

- Full-time non-progressed passes in the November examination among candidates who have repeated Grade 12.

- Full-time passes among progressed candidates who have elected to write all their subjects in November.

Completions of the National Senior Certificate are not reported for:

- Progressed candidates electing to write some of their subjects in June.

These omissions could be rectified in the National Certificate Examination Report by including sections on the outcomes of the February and June examinations. 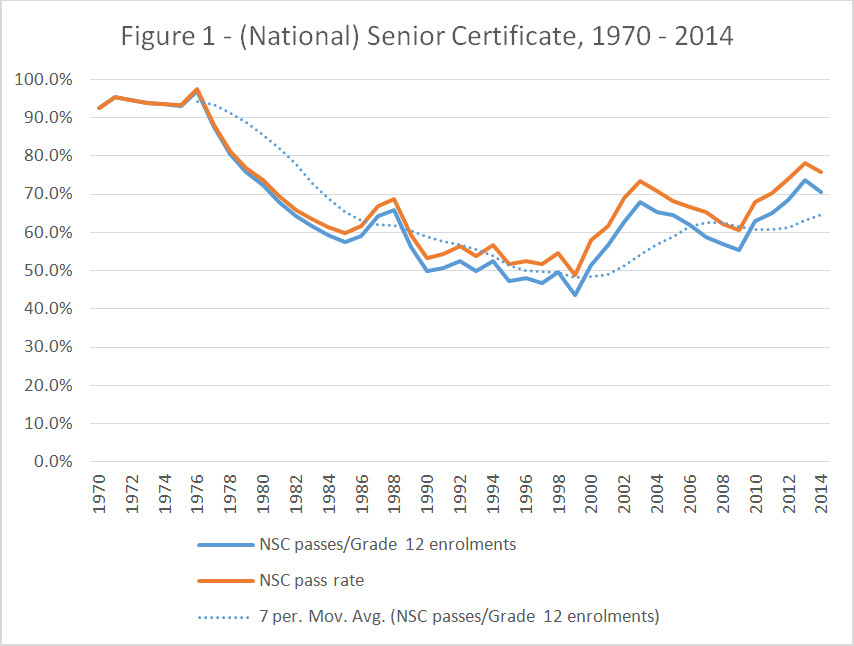 Sources:  South African Statistics, various years
Department of (Basic) Education, Education Statistics, 2000-14
Note:  Since 2000, the average gap between NSC passes/Grade 12 enrolments and the pass rate   has been just over 5%. This is because some Grade 12 learners do not enrol for the NSC and   some of those who do enrol do not complete the examination

2. The hazardous route from Grade 9 to Grade 12

The trendless fluctuation in the number of Grade 12 enrolments is the almost static size of the 15-19 age group between 2005 and 2015, though the average rate of growth in the preceding decade was 1.7% per annum[1]. Coupled with that has been a hazardous route from Grade 9 to Grade 12. The promotion, repeat and drop-out rates in 2011-2012 are set out in Table 1.

The reason for this high attrition can be found in the results of the Annual National Assessments (ANA) of Grade 9 learners. The 2014 ANA found that 33% of learners were at a level below 40% in their home language and that 90% of learners were at a level of below 30% in mathematics. The cognitive demand of starting to prepare for the National Senior Certificate is just too great for many learners to cope.

It is frustration with this state of affairs which has led to the progression policy described in Youth Brief 1. The idea is that progressed learners should be given special assistance, particularly in Grade 12, so that they can overcome learning deficits, in part in respect of material covered up to Grade 9.

The key features of developments since 2008 have been:

School enrolment estimates by grade in 2016 have not yet been published. However, it can be estimated that the introduction of the progression policy has increased enrolments in Grade 12 from 571 819 in 2014 to about 700 000 in 2016.

The number of part-time students who wrote one or more subjects in November increased from 81 552 in 2012 to 107 793 in 2016. The number qualifying for the National Senior Certificate each year is not published, but it is likely to be low.

The Department of Basic Education has developed a system which gives learners as many chances as possible for passing the National Senior Certificate.  Publication of a full account of passes achieved in every year in the February, June and November examinations would help assessment of the effectiveness of the components of the system.  Since the size of the 15-19 age group is now more or less constant in successive years, the quality of regular teaching in schools and additional support outside the regular programme will determine the changes in the number of passes.

[2] Up to 2015, this report was titled The National Senior Certificate Technical Report