Tourism: Be careful of what you wish for

Trevor Grundy on how Venice is being ruined by unwelcome visitors

Over the next few decades, South Africa’s vital tourism industry will face a number of threats, including the impact of climate change, and the depletion of a large range of much-loved animals. But the country can thank its lucky stars it hasn’t yet been hit by two of the plagues making long-term tourist planners in other parts of the world’s demand fewer – not more – dollar, stirling, and euro-waving visitors. After a visit to one of Europe’s most over-crowded cities, Venice, Trevor Grundy reports.

Culture Vultures and Boozy Brits – many in their teens but most of them in their 30s and 40s – stand accused of causing havoc across southern Europe.

Residents here in Venice are taking offence and demanding central government action after seeing their streets filled with alcohol and drug-fuelled foreigners fighting, vomiting, urinating and sometimes having sex openly in front of men, women and children only recently freed from the cultural norms of the Roman Catholic Church.

“Many of us have had it up to here,” said a hotelier close to St Mark’s Square in one of the loveliest cities in the world. He pointed at his throat.

”Venetians are demanding not for more tourists. We’re saying we want far less and a better type of person visiting this historic city. This year we fear that as many as 30 million foreigners will come here. Anyone and everyone with private property is leasing to tour companies and wealthy Russians, Indian, Chinese and Britons, forcing up rent and pushing locals out of a city they love. After the plague in 1630 there were 150,000 locals here. Today, there are about 54,000 with two to three thousands more every year leaving for other parts of Italy or different part of Europe.”

Merchants of Venice no more.

Many of the unwelcome tourists are from Britain.

The meeting was described as an “unprecedented initiative” by the Gruppo 25 Aprile which has long protested against Venice’s overcrowding.

Representatives from similar organisations from Rhodes, Santorini, Dubrovnik, Corfu and Paphos met in Venice to share their experiences and discuss tactics for coping with the impact of mass tourism on local populations.

Tourists spend a fortune in cheap souvenir shops or in fast-food chains rather than at locally run shops and restaurants.

And despite the fast rise in numbers visiting Venice, the total amount spent by foreign visitors is static – implying a higher number of lower value visitors.

In short, Venetians want numbers curbed and encouragement for a different type of tourist to come to their city – art lovers, seekers of past and present culture, people who spend their money on local foods and drinks thus stimulating local trade and incomes.

In recent years, angry Venetians have staged protests against too many tourists with the Mayor of Venice Luigi Brugnaro making overcrowding one of his priorities.

He has introduced measures ranging from promotion of the lesser-explored corners of the city to the installation of people-counters at the most popular sights, as well as “local-first” policies on the city’s large network of water buses.

Last summer, the mayor’s office banned both new tourist accommodations and new fast food outlets but locals say these policies are too little and too late.

More meetings by the Gruppo 25 Aprile are planned for October in Corfu which is also a former Venetian-run Greek island over-run by tourists.

Last year the port of Venice proposed banning the largest cruise ships which in the past have caused grand-scale havoc when they attempt to maneuver into tiny spaces surrounded by thousands of tourists.

In March, the well-respected art historian Salvatore Settis was in London addressing Venice in Peril supporters and publicizing his latest book If Venice Dies.

Richard Morrison of The Times commented:  It’s comforting that Settis puts “if” and not “when“ in his title but that’s the only shred of optimism he offers.”

Fear is that one of the world’s most magnificent  cities is in danger of death not just from rising tides and too many vistors.

A place known in Italian as La  Serenissima is now a carcass of a city. It has no reason except to service those cruise ships spewing out 30,000 tourists a day and who have turned the famous St Mark’s Square into a human traffic jam. At any given moment the ration of tourists to rsidents is 40:1.

Most Venetians have been priced out of their own homes. The city has 2,4000 hotels, many in buildings that were until recently apartments, and those which have survived are now the pleasure resorts of mega-wealthy foreigners with second, third, fourth, fifth homes around the world. And the lagoon is 23 cm higher than a century ago.

If this was any other place in the world, shoulders would shrug. Cities come and cities go. Wasn’t it always thus? But Venice occupies a special place in the story of humankind.

Morrison said that Sett’s book is a must read for those who are concerned about the future of Europe now so threatened by drunken tourists – the new barbarians with money in their wallets instead of swords in their scabbards.

Sessi sees Venice as a symbol of our era’s lamentable tendency to reduce every great cultural site to the level of a Disneyland theme park. “We use them as a background for our selfies,” said Morrison, “tick them off our lists, and then leave without scratching the surface of their profound mysteries.”

It’s early days yet but there’s a slim chance that Venice and some of the world’s other great places will be saved from Attila and the Huns.

There’s a strong chance that travellers from the UK will have to buy visas to travel to Europe. Presently the UK is the third best country in the world for having the strongest passport when it comes to visa-free travel. Residents with a British passport can travel to 175 countries without needing a visa, beaten only by Singapore and Germany.

High visa charges could put off the worst type of British tourist. It’s a big “if” and one unlikely to warm the hearts of Venetians with nowhere to live as the next cruiser floats into the city they might soon be forced to abandon. 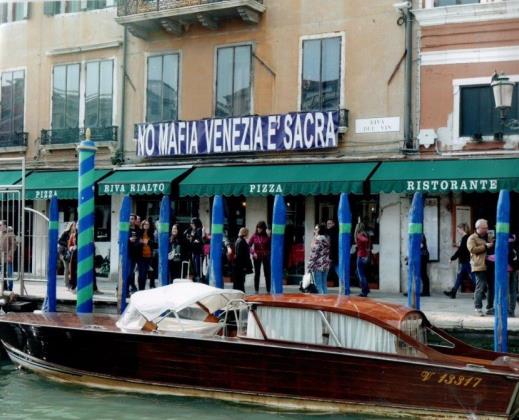 No Mafia Venezia e’ Sacra – a sign that says it all outside a popular restaurant in the Rialto area of Venice. (Picture: Trevor Grundy)