Zapiro, rape culture and the trouble with trigger warnings

It was the eve of two events – a national shutdown and President Jacob Zuma’s birthday – and South Africans were celebrating their near unanimous antagonism toward a corrupt, criminal president. But while the country rallied around this common cause, certain commentators decided a cartoon was more worthy of our contempt.

Published in the Daily Maverick on Tuesday, the Zapiro cartoon depicts three figures holding down a black woman wearing a dress in the colours of the South African flag. The trio of stooges surrounding her represents our captured media (The New Age and ANN7), our captured state organs (Minister of State Security David Mahlobo), and our captured cronies (the ever-sober Bathabile Dlamini). With his back turned, a satisfied Zuma zips his pants and exclaims to acting-president Atul Gupta, “She’s all yours, Boss!”

The trenchant cartoon reiterates Zapiro’s 2008 rape of Lady Justice, which alluded to Khwezi’s allegations against Zuma and the original meaning of rape – which is to seize or take away by force –  and the ceaseless looting and plunder that is occurring under this presidency.

The Twitterati were not amused, nor did they appreciate the re-use of this metaphor. 702 radio host Eusebius McKaiser said: 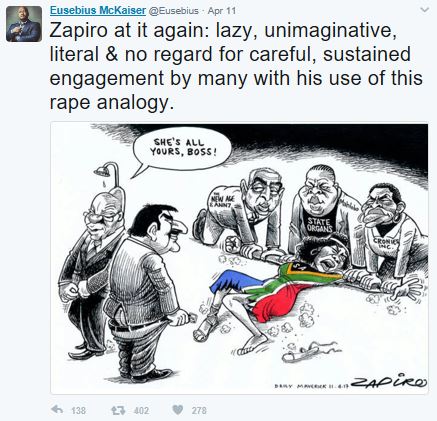 Will we ever get away from Race?

When the doctors go

Will we ever get away from Race?

Ukrainian war correspondent brings the horrors of war to the WEF